Schmallenberg is a town in the German state North Rhine-Westphalia. It has about 24,965 inhabitants.

Schmallenberg is located in the middle of the Sauerland (Rothaargebirge). It is about 25 kilometres south of Meschede, and 120 kilometres from Köln (Cologne).

Lennestadt borders in the north on the communities of Bestwig and Meschede, in the east on Winterberg, in the south on Bad Berleburg, and in the west on the towns of Eslohe and Lennestadt.

Schmallenberg is twinned with

The Benedictine monastery began in 1072 near Schmallenberg on a site at the foot of the Wilzenberg mountain, by Saint Anno, Archbishop of Cologne.

"Alexander de Smalenburg" is said to have given his name to the city of Schmallenberg. The origins of the narrow castle lie in a castle complex that belonged to Cologne, and in 1244 the curtain-walled settlement was officially elevated to city status by Konrad von Hochstaden, Archbishop of Cologne.

During the Middle Ages, textile and ironmongery trades were the main industries in Schmallenberg. Around 1350 there were about 800 living in the town. After an economically quiet period during the 16th century, the new iron hammer technology put the city back on the map. At that time, Schmallenberg’s ironmongery trade was considered the most important one in Westphalia.

In parts of the town like in Oberkirchen there were many witchcraft trials. In 1630 there were 7 processes, from April to June. During these, 58 people were convicted to burn at the stake, for alleged witchcraft. One of the victims was Christine Teipel, a 9 year old child.

After a big fire in 1822, the town was rebuilt using a classical ground plan. This can still be seen today. Ten years before that, the city wall and gates had been torn down. Today, Schmallenberg’s typical features are its half-timbered houses with slated roofs and carved doors, small bays and gables as well as symmetric perrons.

The Fraunhofer Institute for Molecular Biology and Applied Ecology IME conducts research in the field of applied life sciences from a molecular level to entire ecosystems. The IME-Institute has around 140 employees working at the locations Schmallenberg and Aachen. 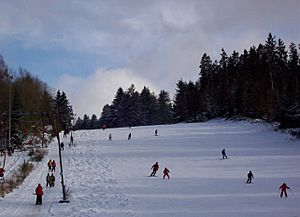 Hiking trails adding up to about 2,500 kilometers, leading through forests, across mountains and through valleys make Schmallenberg. The town at the upper course of the river Lenne has developed into one of Westphalia’s winter sports centers. 250 kilometers of cross-country ski tracks and 30 ski-lifts turn any kind of skiing.

All content from Kiddle encyclopedia articles (including the article images and facts) can be freely used under Attribution-ShareAlike license, unless stated otherwise. Cite this article:
Schmallenberg Facts for Kids. Kiddle Encyclopedia.