Scotia is a company town which was previously wholly owned by the Pacific Lumber Company (PALCO). While it is home to approximately 800 past or present mill employees and their dependents, a process is underway to divide the homes into lots for sale. Located in northwestern California's Humboldt County, its partially wooded hillside near the Eel River is highlighted by the sheer size of mammoth lumber mill buildings located between the town and the river. Via U.S. Route 101, the town is 28 miles (45 km) south of Eureka, California and 244 miles (393 km) north of San Francisco.

Scotia was founded in 1863 as Forestville. It was renamed 25 years later because another community in California had a similar name. It is said that because it was populated by many residents who originated from New Brunswick and Nova Scotia, the name Scotia was chosen by a coin toss, the alternative of course being Brunswick. At the time of its founding, Scotia was just one of many company towns across the Pacific Northwest, many of which closed down during the Great Depression. Early economic development started in 1883 when the Pacific Lumber Company started construction on a mill and housing. Scotia, however, was one of a relative handful of company towns to survive this period. Most of the existing houses were built between the 1920s and 1950s.

The first post office at Scotia opened in 1888. The Humboldt Bay and Eel River Railroad connected Scotia to Humboldt Bay in 1885. This railway became part of Atchison, Topeka and Santa Fe Railway subsidiary San Francisco and Northwestern Railway in 1903 and was linked to the national rail network by completion of the Northwestern Pacific Railroad in 1914.

The town was formed following the winter flood of 1861-1862; that flood level was not observed again until 1955. The Eel River crested at a gauge height of 72 feet (10.1 feet higher than 1955) on 23 December 1964. Eighteen-million board feet of redwood logs and 23-million board feet of lumber were washed out of the Scotia sawmill and scattered along the lower river and Pacific coast to the mouth of the Columbia River.

The 1992 Cape Mendocino earthquakes caused widespread damage in Humboldt County, including Scotia, because there were three major earthquakes in less than a 24-hour span. The first was a magnitude 7.2 quake at 11:06 p.m. on April 25, causing mill damage that took months to repair. The second quake at 12:41 a.m. on April 26, caused the most damage. 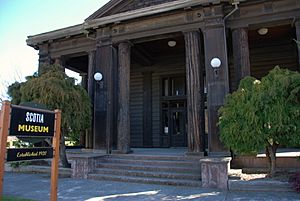 The Scotia Museum contains artifacts, photographs, and exhibits. The Fisheries Center allows visitors to view various types of the area's native fish and experience a setting that is remarkably similar to their natural environment.

Scotia has a warm-summer Mediterranean climate (Csb) according to the Köppen climate classification system.

All content from Kiddle encyclopedia articles (including the article images and facts) can be freely used under Attribution-ShareAlike license, unless stated otherwise. Cite this article:
Scotia, California Facts for Kids. Kiddle Encyclopedia.