Washington Sebastián Abreu Gallo ( born 17 October 1976) is a Uruguayan former professional footballer, best known for his record of appearing for 31 different clubs in 11 countries during his professional career.

Best known by his nickname El Loco (Madman in Spanish), the prolific journeyman goalscorer for club and national team retired in 2021 after a four-month stint with Sud América.

A Uruguayan international for more than 15 years, Abreu represented his country in two World Cups and three Copa América tournaments, winning the latter in 2011.

Born in Minas, Lavalleja Department, Abreu played in numerous clubs throughout the Americas (Uruguay, Argentina, Mexico and Brazil). He also had an unsuccessful stint with Spain's Deportivo de La Coruña, which loaned him several times for the duration of his contract.

In his sole season in La Liga, which started in January 1998, having been signed from San Lorenzo de Almagro, Abreu scored for the Galicians in a 3–1 home defeat of FC Barcelona on 25 January.

After having joined Mexico's Tigres UANL in 2007, Abreu was able to rescind his contract with them in order to join Club Atlético River Plate – the Mexican Football Federation stalled on recognising the transfer because of an imposed moratorium between the clubs. He became the only foreigner to score in the Clásico Regiomontano (Tigres vs. C.F. Monterrey, which he represented the previous year) against each team.

In the middle of 2008, after exhausting negotiations, Abreu signed a deal with Israeli League champions Beitar Jerusalem FC. He appeared in the qualifying rounds of the UEFA Champions League, but his team was quickly eliminated. Additionally, he could not play in the domestic front due to lack of payment.

Abreu re-signed with River Plate in September 2008 after terminating his link with Beitar, with a deal lasting until June 2009. Due to being a late addition, he was not able to play for the side in the Primera División, only featuring in the Copa Sudamericana. The next year, he was eligible for both the domestic and Copa Libertadores fronts.

In early January 2009, Abreu returned to Spain after a ten-year absence, being loaned by River to Segunda División side Real Sociedad, which had lost habitual first choice Iñigo Díaz de Cerio for the season due to a serious leg injury.

On 14 March 2009, he scored a hat-trick in a 3–1 away win against league leaders Xerez CD. His team, however, ultimately failed in returning to the top flight.

On 13 June 2009, Aris Thessaloniki F.C. in Greece signed Abreu from River Plate. However, in January of the following year, the 33-year-old changed clubs and countries again, agreeing on a two-year contract with Brazil's Botafogo de Futebol e Regatas.

Abreu scored the second goal in the 2–1 victory over Clube de Regatas do Flamengo on 18 April 2010, which gave the team the Campeonato Carioca title. In July, he had his link extended until 31 December 2012 with a release clause of US$11.3 million, with the player declaring he had previously held talks with Club Universidad de Chile and Trabzonspor of Turkey.

On 6 February 2011, Abreu was involved in a dramatic match against Fluminense FC: his team won a penalty kick as they were losing 2–1, and he shot it in Panenka-style, with Diego Cavalieri saving the shot by simply standing still. Another penalty was awarded just five minutes later, and he shot it in the same fashion, this time into the right-hand corner of the goal, as the goalkeeper dived the other way; a few minutes later, Botafogo scored again and won the game.

Abreu was loaned to fellow Série A side Figueirense FC on 5 July 2012. However, as the season went on to end in relegation, his contract was ended via Twitter on 24 November, one day before the last game against Grêmio Foot-Ball Porto Alegrense.

From January 2013 to December 2015, Abreu was under contract to Club Nacional de Football, also being loaned to Rosario Central and S.D. Aucas during this timeframe. On 28 December 2015, Paraguayan newspaper D10 reported that he had met in Uruguay with Club Sol de América chairman Miguel Figueredo. He had already received a more lucrative offer from Mexico, but declined in order to be closer to his country, and was officially confirmed on 6 January 2016.

On 12 November 2016, 40-year-old Abreu joined Brazil's Bangu Atlético Clube from Santa Tecla FC, with the deal being made effective the following January. After ten appearances in the Rio de Janeiro State League, he left.

On 4 April 2017, Abreu signed with Montevideo-based team Central Español of the Uruguayan Segunda División. In late December of the same year, he joined Chilean Primera División's Audax Italiano from Deportes Puerto Montt, in the same country but one level below; this transfer broke a world record, as it marked him as the first player to have played for 26 professional clubs.

Abreu returned to Brazil in December 2018 at age 42, agreeing to a contract at Série D's Rio Branco Atlético Clube. He returned to his homeland the following July, signing with Boston River and making his Primera División debut in a 0–0 draw against Club Atlético River Plate (Montevideo) where he donned jersey number 113.

On 8 February 2021, Abreu signed for Athletic Club in Brazil. After four matches in the Campeonato Mineiro, he terminated his contract on 21 March due to the COVID-19 pandemic.

On 30 March 2021, Abreu joined newly promoted Uruguayan top-tier club Sud América. On 10 June, he announced his decision to retire from professional football, and it was reported on news the game against Liverpool F.C. (Montevideo) the following day would be his last. 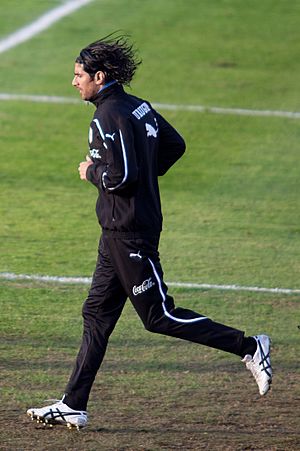 Abreu training with Uruguay in 2011

On 27 May 2010, Abreu stood only five goals short of Uruguayan all-time goalscoring record, held by Héctor Scarone for 79 years. He was selected for the 2010 World Cup in South Africa, where he appeared three times as a substitute; in the quarter-finals against Ghana he scored the decisive penalty shootout attempt (1–1 after 120 minutes), sending his team to the semi-finals for the first time in 40 years.

On 26 April 2019, Abreu was announced as the interim manager of Santa Tecla on an initial one-and-a-half month spell, with the parties holding the option open of keeping him as a player-coach or just as a player afterwards. He won the Copa El Salvador four days later, defeating C.D. Audaz 1–0 in the final.

In December 2019, Abreu was appointed player-coach at Boston River ahead of the upcoming campaign in the Uruguayan Primera División. He resigned from the last-placed club the following 9 November.

Abreu's son, Diego, played for Mexico at under-16 level.

All content from Kiddle encyclopedia articles (including the article images and facts) can be freely used under Attribution-ShareAlike license, unless stated otherwise. Cite this article:
Sebastián Abreu Facts for Kids. Kiddle Encyclopedia.