Selçuk is the central town of Selçuk district, İzmir Province in Turkey, 2 kilometres (1 mile) northeast of the ancient city of Ephesus.

Its original Greek name, Agios Theologos (Άγιος Θεολόγος), referred to John the Theologian, because emperor Justinian had erected there a basilica in honor of the saint. Ayasoluk is a corrupted form of the original name. In the 14th century, it was the capital of the Emirate of Aydin, and visited by Ibn Battuta. He noted, "The congregational mosque in this city is one of the most magnificent mosques in the world and unequaled in beauty." Under the Ottoman Empire, it was known as Ayasoluk. In 1914, it was renamed Selçuk after the Seljuk Turks who first led incursions into the region in the 12th century. 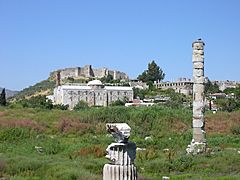 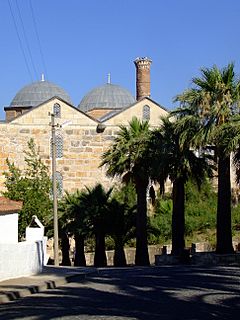 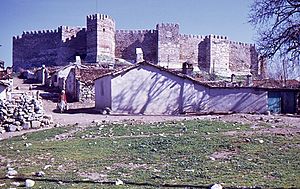 Selçuk town and castle in 1970

It was a township in Kuşadası district till 1957, when it became a district itself. Its neighbours are Torbalı from north, Tire from northeast, Germencik from east, Kuşadası from south, Aegean Sea from west and Menderes (formerly Cumaovası) from northwest.

Selçuk is one of the most visited tourist destinations within Turkey, known for its closeness to the ancient city of Ephesus, House of the Virgin Mary and Seljuk works of art. The 6th century Basilica of St. John the Apostle, which, some claim, is built on the site of the Apostle's tomb, is also inside the town. Procopius said that the basilica was a most sacred and honoured place in Ephesus. It was severely damaged in the invasion of Selzuk Turks in 1090. The place was excavated in 1927, and Pope Paul VI paid it a visit and prayed there.

The old quarter of Selçuk retains much traditional Turkish culture. Ayasoluk Hill dominates the surrounding area, with several historical buildings on its slopes, including the İsa Bey Mosque built by the Aydinids in 1375, and the Grand Fortress. 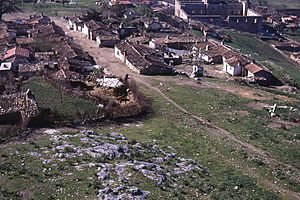 Selçuk town and Isa Bey mosque from the castle in 1970

Ephesus Beach (Turkish: Pamucak) is one of the longest beaches (12 km) in Turkey and hosts five large hotels.

The youth football teams of the İzmir-based sports club Altınordu S.K. play their home matches in the Altınordu Selçuk-Efes Football Complex, which is located WSW of Selçuk. With five football fields, the venue is the largest in İzmir Province.

Selçuk is twinned with:

All content from Kiddle encyclopedia articles (including the article images and facts) can be freely used under Attribution-ShareAlike license, unless stated otherwise. Cite this article:
Selçuk Facts for Kids. Kiddle Encyclopedia.