Shirley Plantation is an estate located on the north bank of the James River in Charles City County, Virginia, USA. It is located on scenic byway State Route 5, between Richmond and Williamsburg. It is the oldest active plantation in Virginia and the oldest family-owned business in North America, dating back to 1614 with operations starting in 1648. It used about 70 to 90 enslaved people at a time for forced labor including plowing the fields, cleaning, childcare, and cooking. It was added to the National Register in 1969 and declared a National Historic Landmark in 1970. 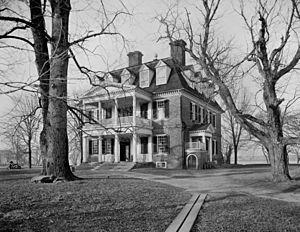 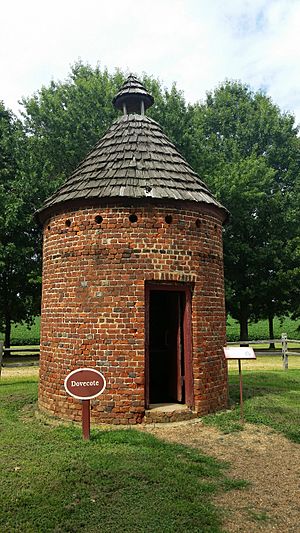 The lands of Shirley Plantation were first settled in 1613 by Sir Thomas West, 3rd Baron De la Warr and were named West and Sherley Hundred. The land was cultivated for growing tobacco to be shipped around the colonies and to England.

In 1638, a portion of this land was granted to Edward Hill, thus beginning the occupation by the Hill family. The original 450-acre (180 ha) plot was expanded by marriage and gradual land acquisition. The land passed to Edward Hill II who was owner during Bacon's Rebellion in 1676. He sided with Governor William Berkeley, and Bacon's rebels proceeded to plunder his home. The land was then inherited by Edward Hill III in 1700. Edward Hill III's only son, Edward Hill IV, died at 16 of consumption, leaving no male heirs. The property reverted to Edward Hill III's youngest daughter Elizabeth who married John Carter (eldest son of Robert "King" Carter), in October 1723. The construction of the present mansion and outbuildings began c. 1723. The mansion, called the "Great House", was completed in 1738 and was located close to the original house built by the Hills that became known as the "Hill House". The Hill House stood until the late 1860s, when it was demolished and the building materials were salvaged and used to construct the mansion at Upper Shirley.

The house has been occupied by the Hill Carter family since 1738 and has housed eight generations. It was at Shirley that Anne Hill Carter was born, and on 18 June 1793 married Henry "Light Horse Harry" Lee in the mansion's parlor. The couple were later parents of Confederate General Robert E. Lee.

Shirley Plantation used enslaved people to cultivate cash crops. Between 70 and 90 slaves were forced to labor on the plantation, plowing the fields, cleaning, and cooking.

The house is largely in its original state and is owned, operated and lived in by direct descendants of Edward Hill I. The house was placed on the National Register in 1969 and recognized as a National Historic Landmark in 1970. The upper floors are occupied by members of the eleventh generation of the Hill Carter family, while the bottom floor is open for tours.

The three story "Great House" is constructed in the Georgian style with red brick walls and white trim boards on a square foundation. The house has no actual front door, as both the riverside and courtyard side entrances have a two-story portico with Doric columns supporting a pediment. The entrance is located in the center, framed by a pair of long rectangular windows on either side. The hipped roof rests on an entablature containing dentil moldings. The roof is broken up by dormers and two large brick chimneys. In the center of the roof is a white pedestal supporting an overturned pineapple.

An article in 1989 criticized the failure of tour guides to discuss the historical existence of slavery and oppression on the estate. In it, the owner Helle Carter said she was most concerned about the "proud" local heritage while trying not to "step on anybody's toes", leaving visiting children to ask basic questions like "Where are the slave quarters? What did the slaves do?"

All content from Kiddle encyclopedia articles (including the article images and facts) can be freely used under Attribution-ShareAlike license, unless stated otherwise. Cite this article:
Shirley Plantation Facts for Kids. Kiddle Encyclopedia.