Signau is a municipality in the administrative district of Emmental in the canton of Bern in Switzerland. 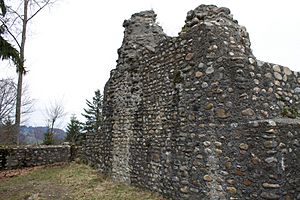 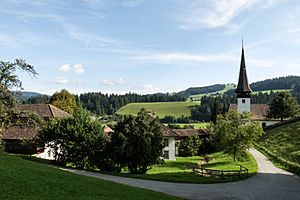 The village church of Signau

Scattered mesolithic, Bronze age and medieval artifacts indicate a long history of settlements in the area. By the High Middle Ages the Lords of Schweinsberg-Attinghausen had built their ancestral castle above the village. The remains of possibly four other earthen fortifications have been discovered around the area. Though the Schweinsberg-Attinghausen castle fell into ruins in 13th or 14th century, the village with Alt- and Neu-Signau Castles (today in Bowil municipality) formed the center of the Herrschaft of Signau. The Barons of Signau built St. Mary's Church in Signau as the parish church for the parish. In 1529 the city of Bern acquired the village and Herrschaft of Signau. In 1648, the village of Eggiwil left the Signau parish to form its own parish and eventually it politically split to become an independent municipality. The village church was renovated and rebuilt in 1850.

By 1622 Signau had a yearly market in the fall. Two other yearly markets were added in the 18th century. By 1800 the town was home to a number of industries and businesses in addition to the farmers and livestock herders who lived there. In 1856 the Schüpbach canal drained the swampy valley floor and opened up additional farm land. In 1864 the Bern-Langnau railroad connected Signau to the growing Swiss rail network. The first line was followed in 1875 by the Langnau-Lucerne line. The good rail and road connections encouraged industry to settle in the town. By 2005, agriculture provided about one-third of all jobs in the community.

There are several primary schools scattered around the municipality in Höhe, Häleschwand, Mutten and Schüpbach. The secondary school in Signau pulls in students from Röthenbach, Eggiwil and Bowil as well as Signau. 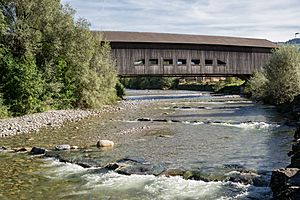 Wooden bridge over the Emme river at Schüpbach

During the same year, housing and buildings made up 3.8% and transportation infrastructure made up 2.9%. A total of 34.1% of the total land area is heavily forested and 1.7% is covered with orchards or small clusters of trees. Of the agricultural land, 23.2% is used for growing crops and 30.8% is pasturage, while 1.2% is used for orchards or vine crops. All the water in the municipality is flowing water.

The municipality is located in the upper Emmental near the head waters of the Emme river. It consists of the linear village of Signau, part of the hamlet of Steinen, the Schüpbach settlement and scattered farmhouses in the surrounding mountains at elevations of 700–1,100 meters (2,300–3,600 ft).

On 31 December 2009 Amtsbezirk Signau, the municipality's former district, was dissolved. On the following day, 1 January 2010, it joined the newly created Verwaltungskreis Emmental.

All content from Kiddle encyclopedia articles (including the article images and facts) can be freely used under Attribution-ShareAlike license, unless stated otherwise. Cite this article:
Signau Facts for Kids. Kiddle Encyclopedia.