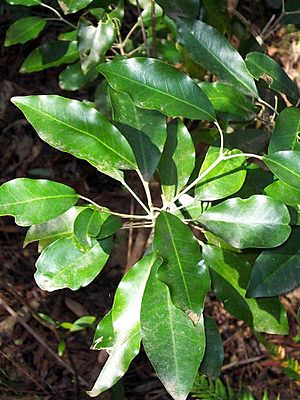 Acronychia wilcoxiana, commonly known as silver aspen, doughwood, snowwood or mushyberry, is a species of small rainforest tree that is endemic to eastern Australia. It has simple, elliptical to egg-shaped leaves with the narrower end towards the base, relatively large groups of whitish flowers in leaf axils and broadly oval to more or less spherical, white fruit.

The silver aspen was first formally described in 1875 by Ferdinand von Mueller who gave it the name Pleiococca wilcoxiana and published the description in Fragmenta phytographiae Australiae. In 1974 Thomas Hartley changed the name to Acronychia wilcoxiana in the Journal of the Arnold Arboretum. The species name honours James Fowler Wilcox, a 19th-century collector of birds and plants in northern New South Wales.

Acronychia wilcoxiana grows in rainforest, mostly between Fraser Island in south-east Queensland and Gosford in central-eastern New South Wales and from sea level to an altitude of 450 m (1,480 ft) but a small population of about eight mature trees has been recorded at Primbee in the Illawarra district.

The fruit of A. wilcoxiana are eaten by rainforest birds, including the wompoo fruit-dove.

Silver aspen is listed as of "least concern" under the Queensland Government Nature Conservation Act 1992.

Germination from seed is not easy, however, the removal of the fleshy aril from the seed will improve results. Seeds may germinate after 6 to 12 months.

All content from Kiddle encyclopedia articles (including the article images and facts) can be freely used under Attribution-ShareAlike license, unless stated otherwise. Cite this article:
Silver aspen Facts for Kids. Kiddle Encyclopedia.