Quercus hypoleucoides, the silverleaf oak or the whiteleaf oak is a North American species of trees or shrubs in the beech family. It grows in the southwestern United States and northern Mexico.

Quercus hypoleucoides, though usually seen as a shrub, can be found to be a full-sized tree, 30 feet (9 meters) tall in areas where it receives sufficient water. Quercus hypoleucoides can be distinguished from other oaks by its lanceolate leaves which are dark green on top but silver white on the lower surface.

Quercus hypoleucoides produces its flowers in the spring as most plants do. It grows in warm regions and is used as an ornamental due to its unusual foliage. Its species name, hypoleucoides, means "white underneath" and also happens to be the main way that it is distinguished from other oak trees. This species has acorns which are eaten by both squirrels and birds and even at times by humans. However, before it is safe for people to eat, the tannic acid must first be leached out due to its toxic qualities.

Quercus hypoleucoides is commonly found in moist canyons and on ridges. It also is found in coniferous forests and high elevated lands from 5,000 to 8,000 feet (1500–2400 meters) above sea level. Mountains of southern Arizona and New Mexico such as the Santa Catalina Mountains and the Chiricahua Mountains, for example, have a pine-oak woodland at an elevation of roughly 5700 to 7200 feet (1710–2160 meters). Here, Quercus hypoleucoides can be found as well as other species of oak trees such as the Quercus arizonica, Q. emoryi, and Q. rugosa.

Specimens have also been collected south of the international frontier, in Sonora, Chihuahua, Coahuila, and Sinaloa.

Quercus hypoleucoides is a vigorous post-fire resprouter and will form a multi-stem shrub in areas of repeated fire. 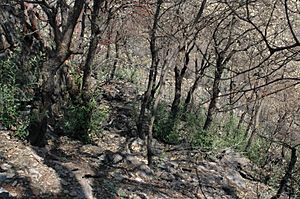 Quercus hypoleucoides has been used for ornamental purposes. Its leaves have a unique contrast due to the very white, silver color of the bottom. Its acorns are a source of food for squirrels and birds. The taller trees also help to provide shade for animals below who need to get away from the strong rays of the sun.

All content from Kiddle encyclopedia articles (including the article images and facts) can be freely used under Attribution-ShareAlike license, unless stated otherwise. Cite this article:
Silverleaf oak Facts for Kids. Kiddle Encyclopedia.