Cameron Park is a census-designated place (CDP) in El Dorado County, California, United States and is part of the Greater Sacramento Area. The population was 19,171 in the 2020 census, up from 18,228 in 2010. Cameron Park is a community located in the Northern California Gold Country of the Sierra Nevada foothills, approximately 30 miles (50 km) east of Sacramento and 70 miles (110 km) west of South Lake Tahoe.

The original Native American inhabitants of the area surrounding Cameron Park were Nisenan, or Southern Maidu Indians. Grinding rocks and burial mounds serve as glimpses of the past and are still visible in various locations in and near Cameron Park.

Modern development accelerated in the area when Larry Cameron purchased 5,000 acres (2,000 ha) of foothill land in the 1950s for development purposes, first for ranching, then involving housing, a golf course, parks, a lake and a small airport. In the years since then, the land has slowly been sub-divided into lots of varying sizes, including ranch-sized properties and medium and high density residential neighborhoods. Today, Cameron Park contains a mix of ranches, single family homes, condominiums, apartments and businesses. As of the 2020 Census, the Cameron Park CDP had 7,748 housing units.

Cameron Park is situated in an interior chaparral zone or brush zone just east of the Central Valley. It is the closest population center to the Pine Hill Ecological Reserve. Native vegetation includes an abundance of redbud and manzanita bushes, and brush in general. Where treed the native trees are primarily gray pines, and oak trees with some small groves of ponderosa pines starting in the higher elevation zones. The elevation of Cameron Park varies between approximately 1,200 and 1,450 feet (370 and 440 m) above sea level, and is not considered in the snow zone of the Sierra Nevada mountains to the east, which are typically between 3,000 and 5,000 feet of elevation and above.

Summers are generally hot and dry, with average daytime temperatures in the 90 to 100 °F (32 to 38 °C) range, but sometimes reaching 110 °F (43 °C), or more. It can be very dry, with little effect of mountain thunderstorms or monsoonal flows that affect the south and interiors. Nights, however, tend to cool off more so than in the Sacramento Valley below, and temperatures in general range a few degrees below the eastern portion of the Central Valley because of the elevation difference. Autumns tend to be an "extended dry, hot summer" throughout California and Cameron Park is no exception. Winters are generally cool and rainy, with highs averaging 40 to 60 °F (4 to 16 °C) and nights occasionally dropping below freezing. Cameron Park typically receives exceptional snow events, about once every few years.

The soil in Cameron Park is reddish and clay-like and usually must be amended in order for many non-native ornamental plants to survive. The soil is derived from Gabbro type of volcanic bedrock and despite its clay-like composition it is good soil and rich in nutrients. Cameron Park is in Sunset Climate Zone 9 and USDA Plant Hardiness Zone 9A.

There were 7,748 housing units reported with a margin of error of 260.

Cameron Airpark Estate's wide streets double as taxiways leading from the residences to the adjacent airport. Many homes have aircraft hangars (oversized garages) that house personal aircraft, allowing residents to commute from home to work entirely by air. The adjoining airport (Cameron Airpark, O61) is a public airport and of economic importance to the surrounding region. 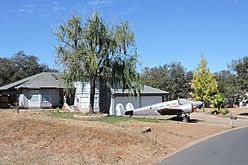 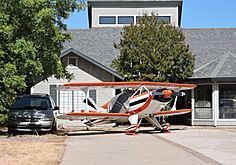 Adjacent to the Airpark Estates sits man-made Cameron Park Lake. Covering approximately 10 acres (4 ha), the area contains a trail encircling the lake, picnic areas, boat rentals, tennis courts, playgrounds, as well as a sandy beach and swimming area separated from the main lake by an earthen dam. Turtles and aquatic fowl can be seen at the lake, and the Community Services District regularly stocks the lake with fish including bluegill, black bass, and black crappie fish. Cameron Park Lake is also the site of the annual "Summer Spectacular" held on or about the Independence Day holiday. Since 1999 this event has provided entertainment, food, and a fireworks show to attendees. Cameron Park Lake is also the home of "Ribstock," a one-day barbecue festival that features a Kansas City Barbeque Society-sanctioned barbecue competition. 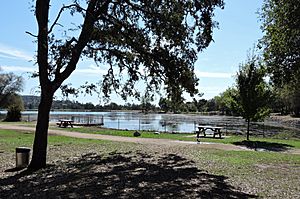 Cameron Park was once known as the home of "Sam's Town", where many travelers stopped on their way to and from Lake Tahoe. This restaurant and amusement complex was located along Highway 50, but was torn down in 2002 and is now a "ForkLift Grocery" store, part of the Nugget Markets chain. All that remains is a plaque noting its former existence.

All content from Kiddle encyclopedia articles (including the article images and facts) can be freely used under Attribution-ShareAlike license, unless stated otherwise. Cite this article:
Cameron Park, California Facts for Kids. Kiddle Encyclopedia.