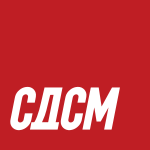 It was founded in 1990 and was the first political party in Macedonia. Its President was Slavko Milosavlevski. It ran in the 1990 Macedonian parliamentary election when Macedonia was still a part of Yugoslavia. It did not win a seat in the 1990 election, scoring 1.6 percent of the vote.

All content from Kiddle encyclopedia articles (including the article images and facts) can be freely used under Attribution-ShareAlike license, unless stated otherwise. Cite this article:
Social Democratic Union of Macedonia Facts for Kids. Kiddle Encyclopedia.