Soignies ( Dutch: Zinnik Picard: Sougniyecode: pcd is deprecated ) is a Walloon municipality located in the Belgian province of Hainaut.

The municipality is composed of the town of Soignies together with the villages of Casteau, Chaussée-Notre-Dame-Louvignies, Horrues, Neufvilles, Naast and Thieusies. Casteau is known worldwide because SHAPE, the military headquarters of NATO, has been based at the village since 1967.

The name of Soignies comes from the Latin word suniacum, which means "on the Senne". The spring of the Senne is near Soignies. After Soignies, the river passes through Brussels.

Soignies is also well known for its blue limestone (from the Carrières du Hainaut) and its glass industry (Durobor). 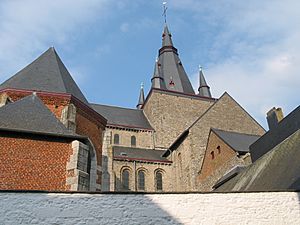 The history of the region starts in the second half of the 7th century. In the 670s, Madelgaire, a wealthy former governor under King Dagobert I, and his wife Waltrude decided to separate and devote themselves to a religious life. Both of them founded an abbey, Madelgaire in Soignies and Waltrude in neighbouring Mons. Madelgaire took the religious name of Vincent. Like his wife, he was canonized after his death and later became the patron saint of the city that would eventually grow around the monastery. At that time, a large forest covered the whole area, the remnants of which near Brussels are still called the Sonian Forest (French: Forêt de Soignes, Dutch: Zoniënwoud) today. The existence of the abbey of Soignies is mentioned for the first time in the Treaty of Meersen, dated August 8, 870, as one of King Charles the Bald's possessions.

The age of the canons

At the end of the 9th century, a general decline in religious life led to a chapter of powerful canons – who did not take any vow of poverty – taking the place of the monks. These canons would remain in power for eight centuries, until the French Revolution. By the 10th century, the canons started the construction of the church of Saint Vincent (Madelgaire), which was to be completed during the following century in the prevalent Romanesque style of the period. The first known charter by Baldwin IV, Count of Hainaut was granted to Soignies in 1142. The fame of the church of Saint Vincent grew in the 13th century, when the bishop of Cambrai granted a 40-day indulgence to every visitor to the church. The city itself grew to urban proportions at around the same time, coinciding with the development of the textile industry and the building of a defensive wall. The first stone quarries mentioned in the archives date from around 1400, but several clues lead to believe that local stone was already quarried much earlier. The cut-stone industry, however, started only around 1700.

On September 1, 1796, the revolutionary council disbanded the local administration by the canons, thereby also dealing a heavy blow to the local economy. In 1812, only 92 people worked in the quarries on a total population of about 4,000 people. The industry, however, rebounded under the Dutch regime, and even more after the Belgian Revolution of 1830. Today, the cut-stone and glass industries are still active. Soignies is also the center of a vibrant service industry, especially in education and health.

All content from Kiddle encyclopedia articles (including the article images and facts) can be freely used under Attribution-ShareAlike license, unless stated otherwise. Cite this article:
Soignies Facts for Kids. Kiddle Encyclopedia.