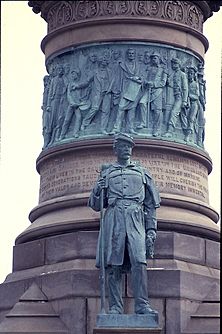 Soldiers and Sailors Monument is a war monument located in Lafayette Square, Buffalo, New York. It was the work of sculptor Casper Buberl and architect George Keller. It was unveiled in 1882.

The dedication on the west (Main Street) side honors those who laid down their lives "in the war to maintain the union for the cause of their country and of mankind." Half of Abraham Lincoln's Gettysburg Address graces the east side of the monument. Several bas-relief panels feature scenes of Lincoln's original cabinet: Treasury Secretary Salmon Chase, Secretary of State William H. Seward, Attorney General Edward Bates, Postmaster General Montgomery Blair, Secretary of the Interior, Caleb Smith, Secretary of the Navy Gideon Welles, Major General Winfield Scott, and Secretary of War Simon Cameron.

All content from Kiddle encyclopedia articles (including the article images and facts) can be freely used under Attribution-ShareAlike license, unless stated otherwise. Cite this article:
Soldiers and Sailors Monument (Buffalo) Facts for Kids. Kiddle Encyclopedia.