The solitary sandpiper (Tringa solitaria) is a small shorebird. The genus name Tringa is the New Latin name given to the green sandpiper by Aldrovandus in 1599 based on Ancient Greek trungas, a thrush-sized, white-rumped, tail-bobbing wading bird mentioned by Aristotle. The specific solitaria is Latin for "solitary" from solus, "alone".

This species measures 18–23 cm (7.1–9.1 in) long, with a wingspan up to 50 cm (20 in) and a body mass of 31–65 g (1.1–2.3 oz). It is a dumpy wader with a dark green back, greyish head and breast and otherwise white underparts. It is obvious in flight, with wings dark above and below, and a dark rump and tail centre. The latter feature distinguishes it from the slightly larger and broader-winged, but otherwise very similar, green sandpiper of Europe and Asia, to which it is closely related. The latter species has a brilliant white rump. In flight, the solitary sandpiper has a characteristic three-note whistle. They both have brown wings with little light dots, and a delicate but contrasting neck and chest pattern. In addition, both species nest in trees, unlike most other scolopacids.

It breeds in woodlands across Alaska and Canada. It is a migratory bird, wintering in Central and South America, especially in the Amazon River basin, and the Caribbean. It is a very rare vagrant to western Europe, and goes there in the summer-autumn period.

The solitary sandpiper is split into two subspecies: 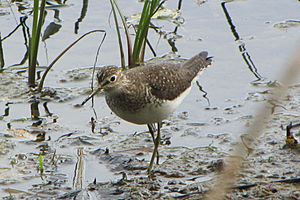 The sandpiper lays a clutch of 3–5 eggs in abandoned tree nests of songbird species, such as those of thrushes. The young birds are encouraged to drop to the ground soon after hatching.

Food is small invertebrates, sometimes small frogs, picked off the mud as the bird works steadily around the edges of its chosen pond.

All content from Kiddle encyclopedia articles (including the article images and facts) can be freely used under Attribution-ShareAlike license, unless stated otherwise. Cite this article:
Solitary sandpiper Facts for Kids. Kiddle Encyclopedia.