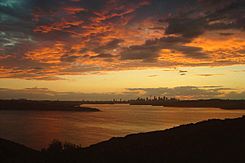 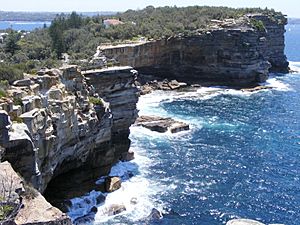 The Beehive Casemate was carved into the cliff face at Obelisk Bay on Sydney Harbour in 1871.

North Head is a headland south-east of the suburb of Manly. It is part of Sydney Harbour National Park. The headland is a promontory of sandstone and is 3.85 square kilometres in area.

The Sydney Quarantine station is located on North Head and is one of the few still-existing facilities that once operated in each state of Australia until the 1980s. From 1828, Spring Cove, on the western side of North Head, was used to quarantine new arrivals to Sydney to minimise the spread of communicable diseases such as smallpox and whooping cough. In 1832, the whole area of North Head was set aside for a quarantine station. A permanent quarantine facility was set up in 1837 and continued to operate until 1984.

The site contains the remnants of Colonial (Colony of New South Wales) period buildings and equipment which were the best available means of combating major contagious diseases and hygiene-related conditions brought to the colony by ship. Soon after Federation the Commonwealth Government initiated a major building and infrastructure program which also remains largely intact today. This program included similar, but smaller, quarantine stations around Australian ports, of which North Head is the only remaining example. This site dealt with major shipping-related epidemic outbreaks which took place up until the 1940s. As such, the quarantine complex represents on of the most complete collection of buildings, equipment and a setting showing how life was lived among the struggles and successes in public health of Australia's past.

After 1945 the requirements for quarantine changed to small air-travel family groups serving periods of observation due to a lack of required inoculations. To these groups the site provided a scenic haven in a rustic historic setting. Many of the inscriptions on the local sandstone outcrops record the names and reasons why previous colonial and latter occupants found themselves in such a place. The buildings remain much as they had been in a former age and provided an opportunity for air-travel 'patients' to become acquainted with a unique collection of historic ephemera. In 1970 the then Officer-in-Charge at the station, Herbert Lavaring, was awarded a Queens Birthday Honors Award (BEM) for his efforts in keeping the historic site preserved while also creating a practical, enriching environment for patients and the public to enjoy. The steam-powered laundry and fumigation autoclaves are a unique collection of industrial technology from the past; they provide an insight into the technology required to deal with combating hygiene-related and other readily communicable diseases in an age before antibiotics and vaccinations.

In 1975, Vietnamese refugees were housed there, and in 1975 and 1976, Cyclone Tracy victims from Darwin, Northern Territory were also housed there. The station was finally closed in 1984 and the management of the site passed to the New South Wales National Parks and Wildlife Service.

The nearby Inner North Head clifftops have many inscriptions from the quarantine period as well as the remnants of 1940s coastal defenses in the form of two gun sites, a range-sighting post, four ammunition storage bunkers and a fortified outhouse. This location has been the site of erosion and geo-technical instability. It may be subject to natural rockfalls as the erosion process continues.

From 1934, defence facilities were installed on the headland but were wound down in 1945. From 1953, there was a School of Artillery, which used the former defence facilities. The harbour reserve was established in 1979. The School of Artillery relocated to Puckapunyal army base in Victoria in 1998, but an artillery museum remains on the headland. In 2001, the site was passed to the Sydney Harbour Federation Trust for management. In 2010 the artillery collection was moved to the Army Museum Bandiana in Victoria; the Trust plans to establish an exhibition on the defence of Sydney on the site. There are still remains of the gun emplacements and artificial tunnels used by the army, many of which can be seen by the public or on guided tours.

Also located on North Head is the Australian Institute of Police Management, housed in a secure compound which has been the 'Seamen's Quarters' of the quarantine station, a place where sailors with acquired STIs were treated and securely confined behind high sandstone walls (prior to the development of modern antibiotics). 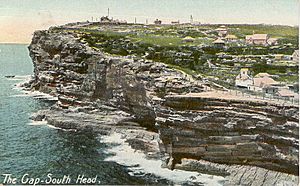 South Head is a headland, part of Sydney Harbour National Park, to the north of the suburb of Watsons Bay.

A twenty-minute foreshore walk on the South Head Heritage Trail offers dramatic views of Middle Head, Manly, North Head and the Pacific Ocean. Starting at the delightful Camp Cove Beach, an 1870s cobblestone path leads first to Lady Bay (also known as Lady Jane) Beach, one of three in Sydney where nude bathing is lawful. It then loops around the headland, passing Hornby Lighthouse, its lightkeepers' cottages, and several gun emplacements from the end of the 19th century.

Middle Head is a headland between North Head and South Head, beside Middle Harbour. It is part of Sydney Harbour National Park.

Middle Head has an extensive network of defence fortifications and tunnels, including the Middle Head Fortifications, the Georges Head Battery and the Lower Georges Heights Commanding Position and other forts located around Sydney Harbour. The fortifications feature "Tiger Cages", where the military trained soldiers by simulating prisoner of war conditions in Vietnam.

All content from Kiddle encyclopedia articles (including the article images and facts) can be freely used under Attribution-ShareAlike license, unless stated otherwise. Cite this article:
Sydney Heads Facts for Kids. Kiddle Encyclopedia.