The southern emu-wren (Stipiturus malachurus) is a species of bird in the Australasian wren family, Maluridae. It is endemic to Australia. Its natural habitats are temperate forests and Mediterranean-type shrubby vegetation. 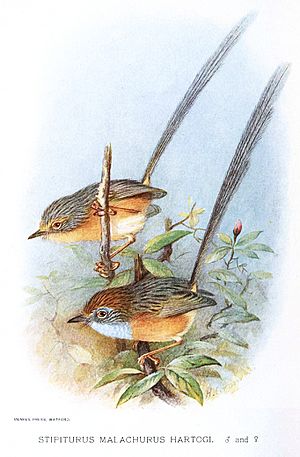 Illustration of a male (foreground) and female

The southern emu-wren is one of three species of the genus Stipiturus, commonly known as emu-wrens, found across southern and central Australia. It was first characterized by naturalist George Shaw in 1798 as Muscicapa malachura, after being collected in the Port Jackson (Sydney) district. It was described as the "soft-tailed flycatcher", native name mur-re-a-nera when painted between 1788 and 1797 by Thomas Watling, one of a group known collectively as the Port Jackson Painter. Another painting in the same series yielded the indigenous name mereangeree. Notes on this latter drawing suggest an alternate name of emu- or cassowary titmouse, from its soft tail feathers. In the first description and illustration of the bird by Major-General Thomas Davies, another Sydney region indigenous name merion binnion was reported, since the tail resembled the "cassowary (emu)" feathers.

The skin of a male southern emu-wren somehow ended up in the collection of Coenraad Jacob Temminck, who believed it to be from Java. From there it was named by François Levaillant as the gauze-tailed warbler. This mistake was not picked up for another 55 years. Veillot defined the genus Malurus and placed the southern emu-wren within it, naming it as Malurus palustris.

The southern emu-wren derives its common name from its tail feathers, the loosely barbed nature of which resembles feathers of the emu, the irony being that the emu-wrens are among the smallest of Australian birds, while the emu is the largest.

Up to eleven subspecies have been described, with eight currently recognised:

The adult male has rusty-brown upperparts with streaks of black, the crown more reddish and grey-brown wings. It has a sky blue throat, upper chest and eyebrow. The tail is double the body length, and is composed of six filamentous feathers, the central two of which are longer than the lateral ones. The underparts are pale red-brown, paler on the belly. The bill is black and the feet and eyes are brown. The female is darker streaked and lacks the blue plumage and redder crown. Its bill is brown with a pale grey base.

Throughout its range, the southern emu-wren inhabits marshes, low heathland and dune areas.

All content from Kiddle encyclopedia articles (including the article images and facts) can be freely used under Attribution-ShareAlike license, unless stated otherwise. Cite this article:
Southern emu-wren Facts for Kids. Kiddle Encyclopedia.