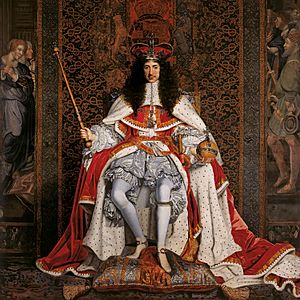 Charles II holding the Orb in 1661 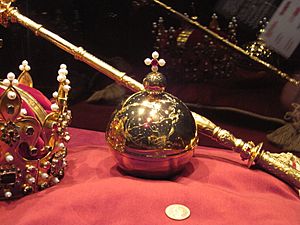 The orb as part of the crown jewels of Poland

The Sovereign's Orb is a piece of coronation regalia. It was created for the coronation of Charles II in 1661 from the royal goldsmith Robert Viner. It is made of gold, sapphires, rubies, emeralds, amethyst, diamonds, pearls, and enamel. It has been used at all coronations and events after the one of Charles II.

In 1671, it was damaged in Colonel Thomas Blood's attempt to steal the regalia. The Orb shows Christian sovereignty over the earth. It was set with 12 large diamonds, 30 rubies, sapphires, and emeralds for the coronation of George I in 1714.

During the coronation ceremony, the Archbishop of Canterbury places the orb in the right hand of the Monarch. It is put back on the altar. The Monarch leaves the coronation wearing the Crown, carrying the Scepter, and holding the Orb.

William and Mary came to the throne in 1689 as King and Queen, each in their own right. An orb was made for Mary II. It is called Queen Mary's Orb. It was used once and never used again. Both orbs were placed on Queen Victoria's coffin at her funeral.

All content from Kiddle encyclopedia articles (including the article images and facts) can be freely used under Attribution-ShareAlike license, unless stated otherwise. Cite this article:
Sovereign's Orb Facts for Kids. Kiddle Encyclopedia.