Sports in Charlotte, North Carolina have a long and varied history. The city is home to teams at nearly every level of American sports including the Carolina Panthers of the National Football League and Charlotte Hornets of the National Basketball Association. In addition to serving as the home base for several teams the city plays host to many events of national and international importance including the longest race in NASCAR, the annual Coca-Cola 600 and golf's Wells Fargo Championship.

Baseball has been played at a high level in Charlotte since at least 1892 when the Charlotte Hornets debuted in a competition known as the South Atlantic League, later a team called the Charlotte Presbyterians took part in the North Carolina Association before reverting to the Hornets name and bouncing around a number of leagues until 1972. In 1976 following a short spell with no professional baseball in the city wrestling promoter Jim Crockett, Jr. brought the Charlotte O's to the Charlotte, the O's would later become the modern day Charlotte Knights. 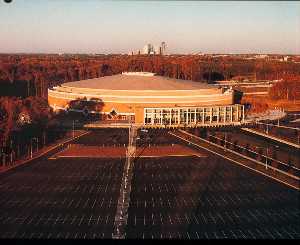 Between 1969 and 1974 Greensboro's American Basketball Association team, the Carolina Cougars played a number of home games each season at the original Charlotte Coliseum, the team would also play games in Raleigh and Winston-Salem. It would be until 1988 that Charlotte would be awarded its first major league team in the form of the Charlotte Hornets of the NBA. The team played out of the 24,000-seat Charlotte Coliseum, known affectionately as "The Hive", and would lead the league in attendance for several seasons before an acrimonious fall out with owner George Shinn triggered a number of events which led to the team relocating to New Orleans in 2002. However, it didn't take long for the Queen City to return to the NBA when a group led by businessman Bob Johnson, the founder of BET, was awarded a franchise which would come to be known as the Charlotte Bobcats. In 2013, eleven years after the Hornets left the city, the Bobcats, now playing at the Spectrum Center, announced the team would assume the city's beloved nickname following the rebranding of the New Orleans team as the Pelicans. Charlotte was also home to a WNBA team, the Charlotte Sting from 1988 until they folded in 2006. 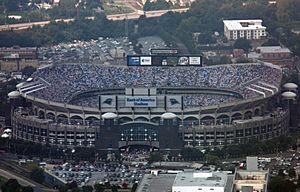 Bank of America Stadium, home of the Panthers.

The history of professional football in Charlotte began in 1967, when the American Football League staged a preseason exhibition game between the Tennessee Titans and the New York Jets. Pro football returned under bizarre circumstances following the relocation of a World Football League team, the Charlotte Hornets, to the city from New York in the middle of the 1974 season. Disillusioned with life at the dilapidated Downing Stadium and saddled with heavy debt from financing renovations to the facility the ownership of the New York Stars sold the franchise to a Charlotte-based group. The Hornets played out of American Legion Memorial Stadium and were a moderate success on the field and in the stands but struggled financially and eventually shuttered operations after an abbreviated 1975 season when the entire league shut down. Professional football would return to Charlotte in 1992 in the form of the Charlotte Rage, an Arena Football League team that played out of the Coliseum. The Rage would qualify for the playoffs twice (in 1993 & 1994) before closing in 1996. The Arena League would return to Charlotte in 2003 when the Carolina Cobras relocated from Raleigh. The Cobras short tenure in Charlotte is memorable for appearances by future Pro Bowler Rob Bironas and future WWE wrestler Thaddeus Bullard, better known as Titus O'Neil.

In 1987 businessman Jerry Richardson announced his intentions to bring the National Football League to the Carolinas with a bid centered in Charlotte. The Richardson-lead group staged several NFL exhibitions around the Carolinas and in 1991 formally filed an expansion bid which was unanimously approved by the NFL's 28 owners making the Carolina Panthers the 29th NFL franchise. The Panthers spent the 1995 season south of the border at Clemson's Memorial Stadium while Bank of America Stadium in Uptown was being prepared for the team's 1996 season. To date the Panthers have appeared in two Super Bowls, Super Bowl XXXVIII and Super Bowl 50, and lay claim to four conference championships and six division championships.

Since 2005 Charlotte has been home to a women's football team called the Carolina Queens. The Queens play home games at Hopewell High's stadium in Huntersville.

Despite being a warm-weather, Southern city, Charlotte has a long ice hockey history that dates back to 1956 when the original Charlotte Checkers were formed and began play in the Eastern Hockey League. The Checkers would play in the EHL for several seasons before moving to the more geographically-friendly Southern Hockey League where the team would win two championships before folding with the rest of the league in 1977. It would be 17-years before the sport would return to the city at the professional level with the formation of an ECHL team named in honor of the original Charlotte hockey team. The second version of the Checkers would take up residence at the original Coliseum (then known as Independence Arena) and would quickly become a success by winning the Kelly Cup in 1996. The team moved to the Spectrum Center in 2005. In 2010 the Checkers would move to the American Hockey League and become the top affiliate of Raleigh's National Hockey League team, the Carolina Hurricanes. In 2015 the Checkers moved back to the Coliseum.

Throughout the years Charlotte has been home to a number of soccer teams, and is currently home of the Charlotte Eagles of the Premier Development League, their sister team, the Charlotte Lady Eagles of the USL W-League, and the Charlotte Independence of the United Soccer League. Both Eagles teams have won a number of championships at the lower-levels of American soccer. In 1981 Charlotte's American Soccer League team, the Carolina Lightnin', won the league championship before a sold-out Memorial Stadium when they defeated New York United 2–1.

Lacrosse is a sport with a relatively short history in Charlotte but one that is experiencing growth following the formation of two professional lacrosse teams. The Charlotte Hounds are a field lacrosse team that plays in Major League Lacrosse, the top level of the sport in the United States, out of Memorial Stadium. The Hounds began play in 2012 and were founded by Jim McPhilliamy. Charlotte's other lacrosse team, the Charlotte Copperheads, plays the indoor version of the game, box lacrosse, in the Professional Lacrosse League. 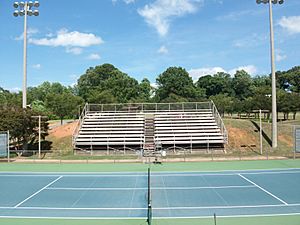 Tennis is played at several venues throughout Charlotte by both individuals and clubs at the recreational and competitive levels. Charlotte's most prominent tennis venue is the 13-court Jeff Adams Tennis Center at Renaissance Park.

Charlotte is home to one of North Carolina's oldest rugby union organizations, the Charlotte Rugby Club, or the Olde Originals. CRC was founded in 1971 by former college rugby players and is based at the Skillbeck Athletic Grounds in Coulwood, a neighborhood in the northwestern portion of the city.

The Charlotte Roller Girls organization is a flat-track roller derby club that was founded by several local women in 2006 and plays out of the Grady Cole Center. 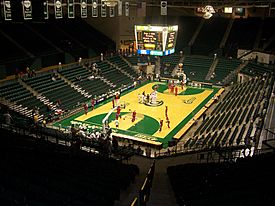 Mecklenburg is home to five collegiate athletic programs and is where the offices of the Big South Conference are based.

Davidson College, founded in 1837 and based in the eponymous north Mecklenburg town, is the oldest of these institutions and is the home of the Wildcats. A full NCAA Division I program, Davidson is a member of the [[Atlantic 10 Conference] ]and fields 19 varsity teams.

Charlotte and Davidson compete in men's basketball for the Hornets' Nest Trophy.

Queens University of Charlotte is a private, Presbyterian school based in the Charlotte neighborhood of Myers Park. Queens began life in 1857 as the Charlotte Female Institute. In the 1980s Queens began admitting male students. The Queens Royals play in the South Atlantic Conference at the NCAA Division II level.

Johnson C. Smith University is an HBCU located near Uptown in Biddleville. JCSU was founded in 1867 and the Golden Bulls play at Division II level as a member of the Central Intercollegiate Athletic Association.

A newcomer, the Charlotte campus of Johnson & Wales University was established in 2004. The JWU Wildcats play men's basketball and women's volleyball as independent members of the United States Collegiate Athletic Association.

The CIAA Basketball Tournament is held in Charlotte every year. The tournament attracts over 100,000 fans and spectators and has a $55 million economic impact on the city.

Charlotte-Mecklenburg's high school teams are aligned into the following conferences as assigned by the North Carolina High School Athletic Association.

Mecklenburg County has long been a superpower in North Carolina high school sports dating back to Garinger's (then known as Charlotte High School) multiple football championships in the 1910s. Garinger in its historic and present day forms would go on to become the earliest of the Charlotte powers in the first half of the 20th century before seeing its fortunes fade in the latter half. Garinger most recently claimed a state championship with its 1989 boys basketball team.

The late 20th and early 21st centuries were marked by the rise of Butler, Independence, and West Charlotte as state football powers. West Charlotte's Lions dominated the state football scene between the mid-80s and 90s, a period during which they won five championships in a ten-year span. The late-90s saw Independence begin a 107-game winning streak that included seven consecutive state championships under coach Tom Knotts. Independence's streak would last until 2007 when Cincinnati's Elder High School defeated the Patriots 41–34 at Nippert Stadium. Butler and Mallard Creek have recently made appearances in state championship games with Butler claiming three titles.

Garinger and West Charlotte each have five state basketball championships while South Meck has four. 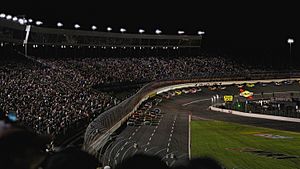 Along with Indianapolis, Charlotte is considered one of the hubs of American motorsports with most NASCAR teams and several open wheel and sports car teams calling Charlotte and the area surrounding it home.

Uptown Charlotte is home of the NASCAR Hall of Fame and the now defunct Charlotte Speedway was the site of the first NASCAR Strictly Stock (a precursor to the modern Sprint Cup Series) race on June 19, 1949, Bob Flock won the pole and Jim Roper was declared the winner after Glenn Dunaway's car failed post-race inspection.

Since then a number of Charlotte-area venues have played host to NASCAR's top series including Metrolina Speedway on the Metrolina Fairgrounds in Charlotte, and Charlotte Motor Speedway in Concord. CMS hosts three Sprint Cup Series events per year including the NASCAR Sprint All-Star Race and has been hosting NASCAR's premier series since 1960. 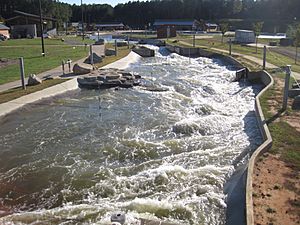 As with all of North Carolina, Charlotte is a hotbed of golf and hosts annual events across several tours. The PGA Tour stops in Charlotte once a year for the Wells Fargo Championship at the Quail Hollow Club and in 2017 the club will host the 99th PGA Championship. River Run Country Club in Davidson plays host the Web.com Tour's Chiquita Classic and Raintree Country Club is the home of the Symetra Classic, an event on the LPGA's developmental Symetra Tour.

The Belk Bowl is played every December in Charlotte and features teams from the Atlantic Coast Conference and Southeastern Conference.

Brooklandwood in the nearby Union County town of Mineral Springs is the site of the Queens Cup Steeplechase, one of steeplechase horse racing's major annual events. The program consists of several races, and is held the last Saturday of April and also features a Jack Russell Terrier judging contest.

All content from Kiddle encyclopedia articles (including the article images and facts) can be freely used under Attribution-ShareAlike license, unless stated otherwise. Cite this article:
Sports in Charlotte, North Carolina Facts for Kids. Kiddle Encyclopedia.