Kids Encyclopedia Facts
Not to be confused with St. James's Park.

St James's Square is the only square in the exclusive St James's district of the City of Westminster. It has predominantly Georgian and Neo-Georgian architecture and a garden in the centre. For its first two hundred or so years it was one of the three or four most fashionable residential address in London. It is now home to the headquarters of a number of well-known businesses, including BP and Rio Tinto Group; to four private members' clubs, the East India Club, the Naval and Military Club, the Canning Club, and the Army and Navy Club; to the High Commission of Cyprus; and to the London Library. Also based in the square is the premises of the think tank Chatham House. A principal feature of the square is an equestrian statue of William III erected in 1808.

In 1662 Charles II extended a lease over the 45 acres of Pall Mall (St James's) Field held by Henry Jermyn, 1st Earl of St Albans to 1720 and soon afterwards the earl began to lay out the property for development. The earl petitioned the king that the class of occupants they both hoped to attract to the new district would not take houses without the prospect of eventually acquiring them outright, and in 1665 the king granted the freehold of the site of St. James's Square and some closely adjacent parts of the field to the earl's trustees. The location was convenient for the royal palaces of Whitehall and St James. The houses on the east, north and west sides of the square were soon developed, each of them being constructed separately as was usual at that time. 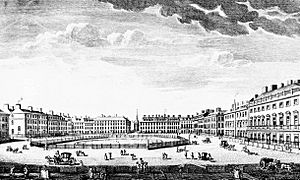 In the 1720s seven dukes and seven earls were in residence. The east, north and western sides of the square contained some of the most desirable houses in London. At first glance they do not appear much different from most other houses in the fashionable parts of the West End, but this is deceptive. The windows were more widely spaced than most, the ceilings were high, and deep plots and ingenious planning allowed some of the houses to contain a very large amount of accommodation indeed (see the plans in the Survey of London extract linked below and note that this is not reflected in the extract from Horwood's map shown as he had no access to the interiors). Some of the houses had fine interiors by leading architects such as Matthew Brettingham, Robert Adam and John Soane.

The southern side of the square was much more modest. The plots were just sixty feet deep and an average of 22 feet wide. They originally faced Pall Mall and had Pall Mall numbers (the modern reconstructions, which are mostly offices, have fronts to both the square and the street). The residents of these houses were not eligible to be trustees of the trust which administered the square or even to use the central garden. The idea of buying them out, demolishing their houses and leaving the space open to the Pall Mall was raised more than once, but never implemented.

Things began to change by the 1830s with the arrival of club-houses, and in 1844 The Builder commented that the square was losing caste and the fashionable were migrating to Belgravia. By 1857 the square contained a bank, an insurance society, two government offices, the London Library, two lodging-houses and three clubs. However, some of the houses continued to be occupied by the fashionable and wealthy into the twentieth century.

The Libyan embassy in St James's Square was the site of the 1984 Libyan Embassy Siege. According to a news report of the time:

A police officer has been killed and ten people injured after shots were fired from the Libyan People's Bureau in central London. WPC Yvonne Fletcher had been helping control a small demonstration outside the embassy when automatic gunfire came from outside. She received a fatal stomach wound and some of the demonstrators were also severely injured. WPC Fletcher, 25, died soon afterwards at Westminster Hospital. 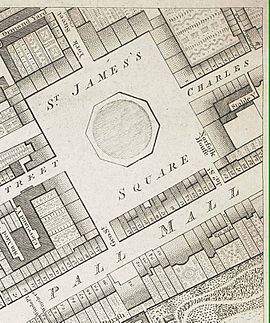 The numbering starts with Number 1 to the north of Charles Street on the eastern side of the square and proceeds anti-clockwise as far as Number 21. The Army and Navy Club's clubhouse occupies the former sites of Number 22, a smaller adjacent house which may have had a George Street number, and several former houses in Pall Mall. Norfolk House at the southern end of the square is Number 31, and the two houses to its north are Numbers 32 and 33. A small house in the angle of the square south of Norfolk House, originally numbered in John Street, and the adjacent house in Pall Mall, have been combined and allocated the number 31A.

The smaller houses along the southern side had Pall Mall numbers until 1884. This block is now occupied by a mixture of 19th and 20th century buildings which are fully built up to the pavements on both sides. Some of them have their main entrance in Pall Mall and others in the square, and there are two separate sets of numbers for them. The numbers in the square range from 22A to 30, with some omissions. 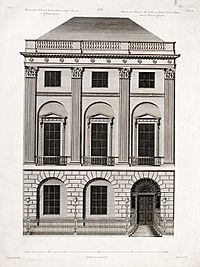 The façade of No. 20 as designed by Robert Adam.

A 360-degree view of St James's Square; from left to right, east, south, west and north

The gardens in the centre of the square are maintained and cared for by the St James's Square Trust, which receives its financial support from the building freeholders. The Trust was established by the Saint James' Square: Rates Act of 1726 (12 Geo. 1 c. 25), which authorised the freeholders to raise a rate on themselves to "clean, adorn and beautify" the square: this was the earliest statute passed to regulate a London square, and is the only one still in unamended operation. The gardens are normally open to the public on weekdays from 7.30am to 4.30pm, but are kept locked and accessible only to freeholders and residents at other times. They are used on an occasional basis as a venue for art exhibitions, weddings, and other functions.

Details of ex-residents taken from blueplaque.com

All content from Kiddle encyclopedia articles (including the article images and facts) can be freely used under Attribution-ShareAlike license, unless stated otherwise. Cite this article:
St James's Square Facts for Kids. Kiddle Encyclopedia.