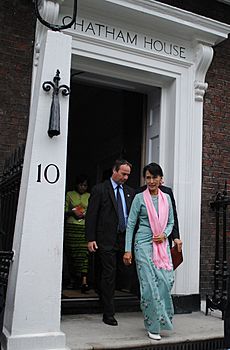 Chatham House, also known as the Royal Institute of International Affairs, is a London think tank. It is a non-profit, non-governmental organization. It analyses and promote the understanding of major international issues and current affairs.

Chatham House is one of the world's leading organizations in this area. It takes its name from its premises, a Grade I listed 18th-century house in St. James's Square, once occupied by three British prime ministers, including William Pitt, 1st Earl of Chatham.

The think tank was founded in 1920 as the British Institute of International Affairs. The first chairman was Robert Cecil, a leading conservative politician. Historian Arnold Toynbee later became director. The Council on Foreign Relations, its American sister institute, was established the following year.

Chatham House's headquarters at 10 St. James's Square, London, was donated to the institute in 1923. It had been the house of three British Prime Ministers - Pitt the Elder, Edward Stanley and William Ewart Gladstone. 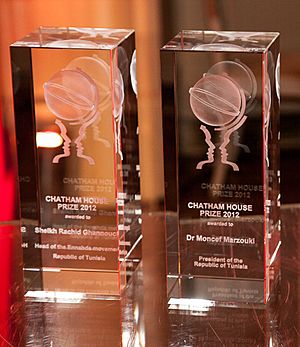 In 1926, now with its royal charter, the name was changed to the Royal Institute of International Affairs. However, it is usually referred to as "Chatham House". It is just a few metres from the former Libyan embassy building where the 1984 Libyan Embassy Siege took place.

The BBC Today/Chatham House lecture series promotes debate and discussion on key international issues of the day. At the inaugural lecture in 2006, Condoleezza Rice defended the U.S. decision to go to war with Iraq.

With its members, Chatham House aims to promote debate on significant developments in international affairs and policy responses. Their independent research and analysis on global, regional and country-specific challenges is intended to offer new ideas to decision makers on how these could best be tackled from the near to the long term. Chatham House is routinely used as a source of information for media organizations seeking background or experts upon matters involving major international issues.

It has been alleged that Chatham House reflects a pro-establishment view of the world. It does have donations from large corporations, governments and other organizations, but Chatham House is membership-based and anyone may join. Chatham House currently has international leaders from business, diplomacy, science, politics and media as its individual members.

All content from Kiddle encyclopedia articles (including the article images and facts) can be freely used under Attribution-ShareAlike license, unless stated otherwise. Cite this article:
Chatham House Facts for Kids. Kiddle Encyclopedia.