St. Luke's Church, Abbottabad is an Anglican church dedicated to St. Luke, now under the jurisdiction of the Peshawar Diocese of the Church of Pakistan. It was originally founded in the town of Abbottabad, British India, in 1864. 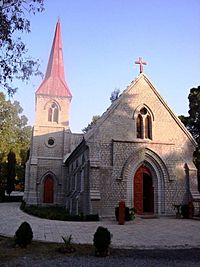 The work on the construction of St Luke's commenced in 1854-55, with initial delays due to slow fund-raising and then a brief interruption due to the Indian War of Independence (or Indian Mutiny) and it was completed and then consecrated by the Bishop of Calcutta in October 1864. Its jurisdiction covered most of the Hazara region including Abbottabad, Haripur, Mansehra and the Galyat hill tracts. The Old Christian Cemetery Abbottabad, which was already existing, was also attached to it.

From June 1947 to April 1948, as a result of the Partition disturbances at the time of the Independence of India and Pakistan, St Luke's was shut down. Regular services only resumed in 1951. In 1970, the Church of Pakistan was established via a union of Anglicans, Scottish Presbyterians (Church of Scotland), United Methodists and Lutherans. Thereafter, St Luke's was formally placed under its new Peshawar Diocese. Since then, full-time clerics have been appointed here to minister to the local congregation.

All content from Kiddle encyclopedia articles (including the article images and facts) can be freely used under Attribution-ShareAlike license, unless stated otherwise. Cite this article:
St. Luke's Church, Abbottabad Facts for Kids. Kiddle Encyclopedia.