The Guild Church of St Mary Aldermary is an Anglican church located in Watling Street at the junction with Bow Lane, in the City of London. Of medieval origin, it was rebuilt from 1510. Badly damaged in the Great Fire of London in 1666, it was rebuilt once more, this time by Sir Christopher Wren; unlike the vast majority of Wren's City churches, St Mary Aldermary is in the Gothic style.

There has been a church on the site for over 900 years. Its name is usually taken to mean that it is the oldest of the City churches dedicated to the Virgin Mary. The patronage of the rectory of St Mary Aldermary belonged to the prior and chapter of Canterbury, but was transferred to the Archbishop of Canterbury in 1400.

In 1510, Sir Henry Keeble financed the building of a new church. The tower was still unfinished when he died in 1518. In 1629, two legacies enabled it to be completed, and the work, begun 120 years before, was finished within three years. Keble was buried in a vault beneath the floor of church, but his grave was not allowed to remain for long. Richard Newcourt recorded that

Sir William Laxton, who died in 1556, and Sir Tho. Lodge, who died in 1583 (both which were Grocers and had been Mayors of this City), were buried in the Vault of this Sir Henry Keeble, his bones unkindly cast out, and his Monument pull'd down, in place whereof, Monuments were set up of the others.

John Stow mentions various dignitaries buried in the early church in his 1598 Survey of London. They include Richard Chaucer, vintner, said by Stow to be the father of the poet Geoffrey Chaucer. John Milton married his third wife, Elizabeth Minshull, in the church in 1663. The parish registers date from 1558, and are now deposited in the Guildhall Library.

St Mary Aldermary was badly damaged in the Great Fire of London of 1666, although parts of its walls and tower survived. It was mostly rebuilt by Sir Christopher Wren in a Gothic style. A legacy of £5,000 had been left by one Henry Rogers for the rebuilding of a church, and his widow agreed to use it to fund the reconstruction of St Mary's. According to some sources, she stipulated that the new church should be an exact imitation of the one largely destroyed.

The church as rebuilt has an aisled nave, six bays long, with a clerestory. There is a short chancel. The tower is attached to the south west corner of the building, and is entered through a western lobby. It is divided into storeys by string courses; the corners have octagonal turrets, terminating in what George Godwin called "carved finials of impure design". The nave and aisles are separated by arcades of clustered columns, supporting somewhat flattened Gothic arches. The ceilings are decorated with elaborate plaster fan vaulting. The east wall of the chancel is set askew in relation to the axis of the church.

The parish of the church of St Thomas the Apostle, destroyed in the Great Fire and not rebuilt, was united with that of St Mary's.

In 1781 a new organ was installed, built by George England and Hugh Russell.

St Mary Aldermary was damaged by German bombs in the London Blitz during the Second World War. All the windows were shattered and some plaster fell from the vaulting but the building itself remained intact. 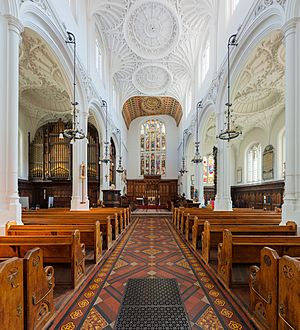 The church has been repaired and restored many times over the years. In 1876–7 there were major changes to the interior: a new oak screen was inserted dividing the church from the lobby; the pews and stalls were replaced, the organ was moved from the western gallery to the chancel; the floor was repaved, new stained glass put into the windows, and a new reredos installed.

The latest interior restoration was finished in April 2005, with special attention paid to the plaster ceilings and the memorials on the north wall. A service was held on April 21, 2005 to celebrate the restoration, presided over by Richard Chartres, the Bishop of London. From 2005 until 2009, Father John Mothersole was the priest-in-charge and oversaw much of the restoration work at that time. He was succeeded in 2010 by Reverend Ian Mobsby, initially as curate and then as priest-in-charge, who continues in post at present.

In January 2010, the Bishop and Archdeacon of London invited the Moot Community to make their home in St Mary Aldermary. Moot is a Church of England community in the new monastic tradition. Members annually commit to live by a "rhythm of life", which encompasses spiritual practices such as prayer, meditation and presence, and values such as acceptance, balance, creativity and hospitality. The community is currently in a process of discernment about whether it has a vocation as a Church of England Acknowledged Religious Community.

Daily prayer, regular worship services, meditation and discussion groups go on in the church, and the community also hosts conferences and courses on subjects such as justice in economics, conflict resolution or mindfulness. The church hosts regular art exhibitions and installations, and retreat days. It is home to a café, Host, which sells fair trade coffee and goods, and there is a small market of food stalls outside the church on weekdays.

Since 2007, the church has been the Regimental Church of the Royal Tank Regiment.

All content from Kiddle encyclopedia articles (including the article images and facts) can be freely used under Attribution-ShareAlike license, unless stated otherwise. Cite this article:
St Mary Aldermary Facts for Kids. Kiddle Encyclopedia.