St Mary Magdalene, Richmond, in the Anglican Diocese of Southwark, is a Grade II* listed parish church on Paradise Road, Richmond, London. The church was built in the early 16th century but has been greatly altered so that, apart from the tower, the visible parts of the church date from the 18th, 19th and early 20th centuries.

Since 1996 St Mary Magdalene's has been part of the Richmond Team Ministry, which also includes the churches of St John the Divine and St Matthias. It has a strong musical tradition and offers choral services each Sunday.

The initial chapel was built in around 1220. The church was entirely reconstructed during the reign of Henry VII who, after rebuilding the royal palace of Sheen, renamed Sheen as Richmond in 1501. The two bottom sections of the tower that survive from this period were re-faced in flint in 1904.

The plaster ceiling over the nave was replaced in 1866 by the architect Arthur Blomfield with timberwork, described by Bridget Cherry and Nikolaus Pevsner as "inappropriate". Blomfield also constructed new galleries and replaced the box pews with bench pews.

In 1903–04 the architect George Frederick Bodley replaced the chancel with a new chancel, two chapels (Chapel of All Souls and Chapel of All Saints) and a vestry in a Neo-Gothic style. The tower was faced with flint and stone to match the east end. The north and south galleries were removed at this time. The west gallery was removed in 1935–36. 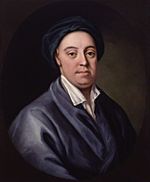 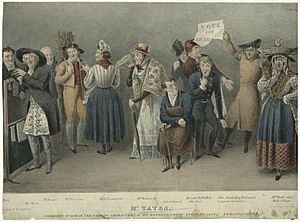 The tower contains a ring of eight bells. They bear dates between 1680 and 1761 and were re-hung in a clockwise ring in the 1980s. The tenor bell weighs almost 19 cwt.

The organ was built in 1907 by J. W. Walker & Sons Ltd, who also cleaned it in 1929 and restored it in 1965. A specification of the organ can be found on the National Pipe Organ Register.

All content from Kiddle encyclopedia articles (including the article images and facts) can be freely used under Attribution-ShareAlike license, unless stated otherwise. Cite this article:
St Mary Magdalene, Richmond Facts for Kids. Kiddle Encyclopedia.