Richmond Cemetery is a cemetery on Lower Grove Road in Richmond in the London Borough of Richmond upon Thames, England. The cemetery opened in 1786 on a plot of land granted by an Act of Parliament the previous year. The cemetery has been expanded several times and now occupies a 15-acre (6-hectare) site which, prior to the expansion of London, was a rural area of Surrey. It is bounded to the east by Richmond Park and to the north by East Sheen Cemetery, with which it is now contiguous and whose chapel is used for services by both cemeteries. Richmond cemetery originally contained two chapels—one Anglican and one Nonconformist—both built in the Gothic revival style, but both are now privately owned and the Nonconformist chapel today falls outside the cemetery walls after a redrawing of its boundaries.

Many prominent people are buried in the cemetery, as are 39 soldiers who died at the South African Hospital in Richmond Park during the First World War and many ex-servicemen from the nearby Royal Star and Garter Home. These residents are commemorated by the Bromhead Memorial, which lists the names of those who are not commemorated elsewhere, while the South African soldiers are commemorated by a cenotaph designed by Sir Edwin Lutyens, derived from his design of the Cenotaph on Whitehall in central London. The war graves and the cenotaph are the responsibility of the Commonwealth War Graves Commission.

The cemetery was founded following the Richmond: Poor Relief, etc. Act 1785 (25 Geo.3 c.41), which granted Pesthouse Common, formerly owned by King George III, to Richmond vestry. A plot of 1.5 acres (0.6 hectares) was enclosed for a burial ground; a workhouse was also provided. The site was originally a simple square plot divided into four by footpaths; between 1865 and 1879, the cemetery expanded and subsumed the land between the original site and the workhouse, which was laid out in a grid format, and by 1894 the cemetery had further expanded onto a plot of land to the north, also in a grid layout. The cemetery now occupies an area of 15 acres (6 hectares), ten times its original size. In 1873 the local vicar built a wall to divide the consecrated ground (for Church of England devotees) from the unconsecrated ground (for Nonconformists and non-believers), but the move met with consternation in the local community and the wall was found torn down one morning. The vicar offered a reward for information as to the identities of the culprits but was apparently unsuccessful. There was never any attempt to rebuild the wall.

The original plot contains many mature trees, including yews, cypresses, and several palm trees. Prior to the expansion of London, the site was originally in a rural and picturesque location, comparable to a smaller-scale Highgate Cemetery, and retains its rural feel today; author Darren Beach describes it as having "a decidedly rural feel", while historian Hugh Meller calls it "an unusually rural cemetery which in spring simulates a country churchyard".

Richmond Cemetery originally contained two chapels, one of Church of England denomination and one for Nonconformists, both built in the Gothic revival style. The Church of England chapel (shown as "Richmond Community Chapel" on Richmond Council's map of Richmond and East Sheen Cemeteries) was built in 1875 to a design by Sir Arthur Blomfield and is a grade II listed building. It is constructed predominantly of Kentish ragstone with Bath stone embellishments. The front of the building has a buttressed arch above the main door, which bears the inscription "In the Garden was a new sepulchre, there laid they Jesus". Above the door are three lancet arches, and in the apex is a large wheel window. The roof is tiled, with the remains of a flèche evident. The chapel fell into disrepair, requiring restoration in the 1990s. It no longer fulfils its original purpose and houses a children's nursery. The Nonconformist chapel, to the north of the Anglican chapel, was sold in 1992 and was also restored in the 1990s. Its design is unusual for an English cemetery chapel, featuring significant plate tracery and decorative sculpture, but the architect is unknown. After a redrawing of the cemetery's boundary, it now stands outside the gates on Grove Road.

Beyond the former Anglican chapel are old burial grounds that are now closed. The area called "Richmond Old Burial Ground" covers about four acres. It was first opened for burials in 1856, and most burials there took place between then and the First World War. Volunteers have now photographed and recorded the inscriptions on more than 1000 graves, recording the deaths of over 2000 people.

To the east of the cemetery is Richmond Park, the two sites separated only by a five-metre (sixteen-foot, six-inch) strip of land known as the Freebord or "deer leap", owned by the Crown to protect the park's boundaries and allow access to the exterior of the wall for inspection and repair. Just to the north is East Sheen Cemetery. The two cemeteries are today joined, forming a contiguous area of graves, though the original boundary is still denoted by a holly hedge. The chapel in East Sheen Cemetery is now used for services for both cemeteries. Both cemeteries are now administered and maintained by Richmond upon Thames London Borough Council.

The cemetery enjoys protected status as a result of designation as Metropolitan Open Land and (jointly with East Sheen Cemetery and Pesthouse Common) as a conservation area. 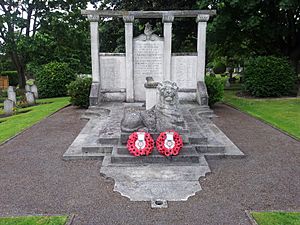 Richmond Cemetery contains several significant memorials, including a granite tomb belonging to engraver William Harvey, originally set at a steep angle but since subsided, which is decorated by an incised palette in pink granite. The Prendergast family are commemorated by two crosses featuring floral-themed engravings According to Historic England, "Richmond Cemetery is unusually endowed with war memorials and war graves". An unusual number of recipients of the Victoria Cross—Britain's highest military honour for gallantry—are buried there.

Two sections of the cemetery are dedicated to deceased residents of the Royal Star and Garter Home in Richmond. One is denoted by the Bromhead Memorial while the other—opened in 1994—is marked with a Christian cross by a local stonemason. Both plots contain standardised gravestones and do not allow personalised memorials. The Bromhead Memorial is a large monument close to the boundary with East Sheen Cemetery. Dedicated to Lieutenant Colonel Alfred Charles Bromhead and his wife Margaret, former governors of the home, it takes the form of a triptych with stone panels, in front of which is a low spine wall; both the spine walls and the panels in the triptych are engraved with the names of deceased ex-servicemen from the home who are not commemorated elsewhere. The whole memorial is set on a stone base with three steps, and at the very front is a sculpture of a seated lion. It was designed by Cecil Thomas and was unveiled in 1957 as a gift from the governor of the home in a ceremony presided over by Field Marshal Lord Alanbrooke and the Bishop of Southwark. It is a grade II listed building. 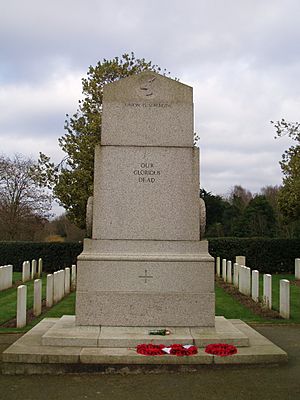 Another section is given over to war graves commemorating 39 soldiers who died at the South African Hospital which operated in Richmond Park during, and immediately after, the First World War; the section is marked by a Cross of Sacrifice and a cenotaph (the South African War Memorial). The cenotaph was designed by Sir Edwin Lutyens and is a grade II listed building. The design is derived from the Cenotaph on Whitehall, the most famous of Lutyens' memorials in Britain and the most influential on other First World War memorials. It is of coarse granite construction, with a springbok inscribed in the apex of the front and rear while the sides both carry a carved stone wreath; the only text inscribed on the monument are the phrases "union is strength" and "our glorious dead" on the front, and the same text translated into Dutch on the rear. The memorial was unveiled by South African General Jan Smuts on 30 June 1921. The war graves section is cared for by the Commonwealth War Graves Commission (CWGC) on behalf of the South African government. The cenotaph became a focus for commemorations in the 1920s and 1930s, after which it appears to have been forgotten and was neglected until 1981 when the CWGC became aware of it and agreed with the South African government to take responsibility for its upkeep. There are a total 178 Commonwealth service personnel from both World Wars buried in this cemetery. 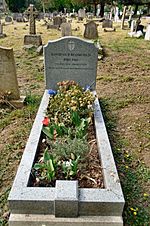 All content from Kiddle encyclopedia articles (including the article images and facts) can be freely used under Attribution-ShareAlike license, unless stated otherwise. Cite this article:
Richmond Cemetery Facts for Kids. Kiddle Encyclopedia.