The St Mellion International Resort, in the parish of St Mellion, near Saltash, is a hotel with recreational facilities, situated in east Cornwall.

The Old Course, the St Mellion estate's first course, was laid out on the potato farm of Hermon and Martin Bond and opened in 1976. Beginning in 2008 the golf course was significantly altered as part of a £20-million redevelopment of the complex. The changes included the construction of 9 new golf holes which were redesignated as part of the Kernow Course from May 2010.

The course designed by Jack Nicklaus was officially opened in 1988 with the hosting of a USA vs GB match featuring Jack Nicklaus (himself) and Tom Watson representing the USA against Sandy Lyle and Nick Faldo representing Great Britain. The Nicklaus course hosted the Benson & Hedges International Open on 7 occasions between 1979 and 1995, and has twice hosted The English Seniors Open.

St Mellion's Nicklaus Course is a contender for future PGA European Tour events, following its £100 million redevelopment completed in 2010. However St Mellion's initially-proposed hosting of the English Open tournament was postponed after the developers ran into financial difficulties following the credit crunch. 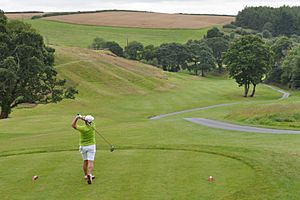 The scorecard for the Nicklaus Course from the championship yardage is given below:

The Kernow Course, St Mellion's newer course which opened in 2010, takes its name from the Cornish for Cornwall. It was designed by Alan Leather and incorporates parts of the Old Course.

St Mellion has hosted the Benson & Hedges International Open on the European Tour on 7 occasions.

All content from Kiddle encyclopedia articles (including the article images and facts) can be freely used under Attribution-ShareAlike license, unless stated otherwise. Cite this article:
St Mellion International Resort Facts for Kids. Kiddle Encyclopedia.