Kirkby Stephen Parish Church is often called the "Cathedral of the Dales" and, in Cumbria, only Kendal Parish Church is larger. There have been three churches on this site. The first was built in Anglo-Saxon times; it was replaced in 1170 by a Norman church. This was replaced by the present building in 1240 and has been altered in the centuries since, being partly rebuilt in 1847 and restored in the 1870s. It is a Grade II* listed building.

The church is approached from the market square, where it is almost hidden from view by the cloisters, built in 1810.

The Church has no official dedication. There is no factual basis to support either reference to St Stephen or to the other rumoured previous dedication to St John. However, the church is often referred to as 'St Stephen's Church', with reference to the place-name of Kirkby Stephen. 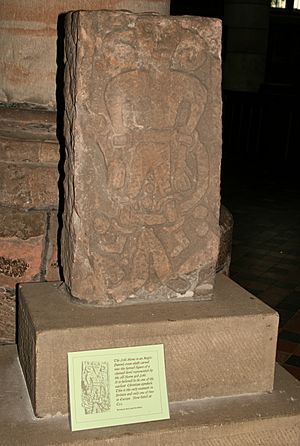 The north or Wharton chapel has a late sixteenth-century altar tomb with effigies of Thomas Wharton, 1st Baron Wharton and his 2 wives.

The most important monument in the church is a relief of the Norse god Loki, who is shown bound and chained. It was part of an Anglo-Saxon cross shaft.

The church contains a three manual pipe organ dating from 1888. A specification of the organ can be found on the National Pipe Organ Register.

All content from Kiddle encyclopedia articles (including the article images and facts) can be freely used under Attribution-ShareAlike license, unless stated otherwise. Cite this article:
St Stephen's Church, Kirkby Stephen Facts for Kids. Kiddle Encyclopedia.