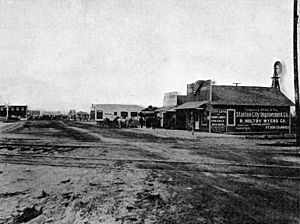 Stanton is a city in northern Orange County, California, part of the Los Angeles metropolitan area. The population was 37,962 at the 2020 United States Census. The city was incorporated in 1956 and operates under the council–manager form of government, providing a full range of municipal services. Stanton is bounded by Cypress on the west, Anaheim on the north, and east, and Garden Grove on the east and south.

On November 6, 1905, the Los Angeles Interurban Railway started service on the Santa Ana Line. It ran along an almost perfectly straight line between Watts and Santa Ana. Access to transportation allowed the population of the rural area which is now Stanton and West Anaheim to grow. In 1908, the privately owned Pacific Electric Railway leased the Santa Ana Line and took over the service which extended its regional light-rail system. By 1928, the impressive thousand-mile system allowed residents convenient travel throughout Los Angeles and Orange Counties. See 1928 Map. The passenger service to Santa Ana was discontinued in 1950, shortly after the railway was taken over by the Metropolitan Transportation Agency. The easement still runs through town and is empty or used for parking. It intersects Beach/Pacific and Cerritos/Western.

The area was incorporated into the first City of Stanton in 1911. It was decided to dis-incorporate in 1924. The motivation for giving up cityhood seems to be that it would relieve city taxpayers from the financial burden of building roads. As an unincorporated area, roads were paid for by the state. Also the main motivation for the 1911 incorporation — the city of Anaheim's 1911 plan to build a "sewage farm" west of their city — was no longer relevant. The costs of cityhood were greater than the benefit.

In the early 1950s, the area had experienced a post-war population boom, and in May 1956 the citizens decided to incorporate into today's City of Stanton. The first city was around 16 square miles (41 km2), and today's Stanton is a bit over three square miles. The cost of being incorporated into a city is still a salient issue in this part of the county. There are many small areas around Stanton which are unincorporated and receive their services from the County of Orange.

The city of Stanton mitigates the high costs of cityhood for a relatively small population by contracting out municipal services. Most of the police services and fire protection are provided by the Orange County's Sheriff's Department and Orange County Fire Authority respectively. Ambulance service is provided by a private company, Care Ambulance Service. Stanton had formed its own police department when the city incorporated in 1956, but a union strike citing poor working conditions was originally reported as the major cause of its disbanding (and takeover by the Sheriff's Department) in 1988. The city's crime rate has decreased 40% from 2007 to 2013.

According to the United States Census Bureau, the city has a total area of 3.15 square miles (8.2 km2), all land.

According to the 2010 United States Census, Stanton had a median household income of $50,542, with 16.9% of the population living below the federal poverty line. 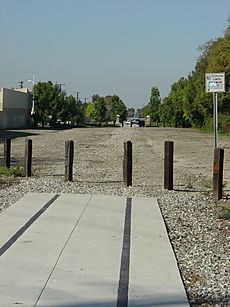 Over the past five years the city of Stanton has upgraded its parks. It has also opened new parks: Veterans Memorial Park, Pocket Park and Harry M. Dotson Park. Public parks include Harry M Dotson Park, Hollenbeck Park, the Norm Ross Sports Complex, Martha Weishaupt Linear Park, Premier Park, Stanton Community Services Center Park, Stanton Municipal Tennis Center, Stanton Park, Veterans Memorial Park, Stanton Central Park, and Zuniga Park. Adventure City, a small amusement park, is located in Stanton. In 2012, Hollenbeck Park was closed and fenced-off for over a year. The city claimed it could not afford to maintain the large property. According to the city Fire Department, funds were raised by the department for maintenance and the park was re-opened 2014.

In the 1950s, with help of the James Irvine Foundation, the Stanton Lions Club and a land donation from a local farmer, Lions-Stock Park was built with a sports facility and community center. This privately owned park was later purchased by the school board.

Residents of the city are served by four public school districts and one private school:

The Savanna School District serves elementary school students and has a high API similar school ranking of 9.75 out of 10 as compiled by the California Department of Education.

The Magnolia School District's Baden-Powell and Pyles Schools have been named as a Title I Academic Achievement School.

Stanton is located north of the Garden Grove (22) Freeway, south of the Artesia (91) Freeway, east of the San Gabriel River (605) Freeway and west of the Santa Ana (5) Freeway.

Fire protection in Stanton is provided by the Orange County Fire Authority (OCFA) with ambulance transport by Care Ambulance Service. The Orange County Sheriff's Department (OCSD) provides law enforcement services under the command of Police Chief Cruz Alday. In 1987 the city disbanded its police and fire departments and contracted with county agencies.

All content from Kiddle encyclopedia articles (including the article images and facts) can be freely used under Attribution-ShareAlike license, unless stated otherwise. Cite this article:
Stanton, California Facts for Kids. Kiddle Encyclopedia.