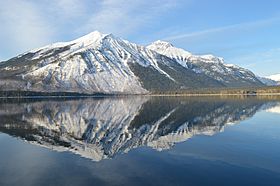 Stanton Mountain, is a 7,750 feet (2,360 m) mountain summit located in the Livingston Range, of Glacier National Park in the U.S. state of Montana. Stanton Mountain rises more than 4,500 feet (1,400 m) above the northern shore of Lake McDonald. The mountain's name likely refers to Mrs. Lottie Stanton who lived near the west side of the park in the late 1800s, and with her husband operated a livery stable in historic Demersville. The mountain's name was officially adopted in 1929. The nearest higher peak is Mount Vaught, 1.38 miles (2.22 km) to the northeast. Precipitation runoff from the mountain drains into tributaries of the Flathead River. 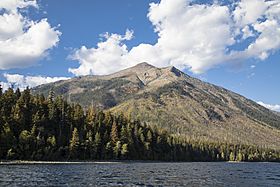 Based on the Köppen climate classification, Stanton Mountain is located in a subarctic climate zone characterized by long, usually very cold winters, and short, cool to mild summers. Temperatures can drop below −10 °F with wind chill factors below −30 °F.

Like other mountains in Glacier National Park, Stanton Mountain is composed of sedimentary rock laid down during the Precambrian to Jurassic periods. Formed in shallow seas, this sedimentary rock was initially uplifted beginning 170 million years ago when the Lewis Overthrust fault pushed an enormous slab of precambrian rocks 3 mi (4.8 km) thick, 50 miles (80 km) wide and 160 miles (260 km) long over younger rock of the cretaceous period.

All content from Kiddle encyclopedia articles (including the article images and facts) can be freely used under Attribution-ShareAlike license, unless stated otherwise. Cite this article:
Stanton Mountain Facts for Kids. Kiddle Encyclopedia.