Star City is a city in, and the county seat of, Lincoln County, Arkansas, United States. Incorporated in 1876, the city is located between the Arkansas Delta and Arkansas Timberlands. With an economy historically based on agriculture, today Star City has developed a diverse economy based on both industry and agriculture. As of the 2010 census, the population was 2,274. Star City is located within the Pine Bluff metropolitan area.

The city is between Monticello and Pine Bluff.

Star City, Arkansas was the setting for the 1992 police thriller film One False Move, starring actors Bill Paxton and Billy Bob Thornton, and written by Thornton. However, only some filming was reportedly done there when it was actually shot in Cotton Plant, AR.

Star City is the home of the annual STARDAZE festival. The festival draws people from all over southeastern Arkansas. 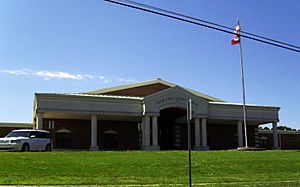 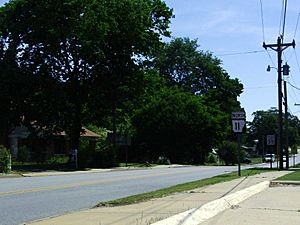 Highway 11 near the US 425 intersection in Star City

Star City is located at the intersection of US Highway 425 (US 425) and Highway 11 (AR 11). US 425 is a major north-south highway in southeast Arkansas and connects the city to Pine Bluff to the north and Monticello to the south. AR 11 provides access to Gould and US 65 to the east and US 63 to the west.

AR 530 currently terminates near Star City. This route is a two-lane freeway segment of a future extension of Interstate 530 (I-530) south to Monticello. In Monticello, the planned extension will connect to future Interstate 69, a proposed road connecting Port Huron, Michigan, and Rosenberg, Texas.

All content from Kiddle encyclopedia articles (including the article images and facts) can be freely used under Attribution-ShareAlike license, unless stated otherwise. Cite this article:
Star City, Arkansas Facts for Kids. Kiddle Encyclopedia.