Steinbok Peak, is a 2,012-metre (6,601-foot) granitic summit located in the North Cascades of southwestern British Columbia, Canada. It is situated 12 km (7 mi) west-northwest of Coquihalla Summit, 1.3 km (1 mi) northwest of Gamuza Peak, and 1 km (1 mi) southeast of Ibex Peak, its nearest higher peak. Precipitation runoff from the peak drains into tributaries of the Anderson River. The mountain was named for the steinbok, as part of the ungulate names theme for several other nearby peaks that were submitted by Philip Kubik of Vancouver. The mountain's name was officially adopted on February 5, 1976, by the Geographical Names Board of Canada. Steinbok was used to represent Kichatna Spire in the 1991 movie K2.

During the Pleistocene period dating back over two million years ago, glaciation advancing and retreating repeatedly scoured the landscape. The "U"-shaped cross section of the river valleys are a result of recent glaciation. Uplift and faulting in combination with glaciation have been the dominant processes which have created the tall peaks and deep valleys of the North Cascades area. 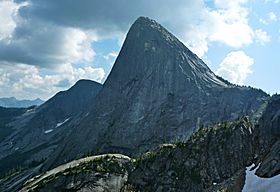 Based on the Köppen climate classification, Steinbok Peak is located in the marine west coast climate zone of western North America. Most weather fronts originate in the Pacific Ocean, and travel east toward the Cascade Range where they are forced upward by the range (Orographic lift), causing them to drop their moisture in the form of rain or snowfall. As a result, the Cascade Mountains experience high precipitation, especially during the winter months in the form of snowfall. Temperatures can drop below −20 °C with wind chill factors below −30 °C. The months July through September offer the most favorable weather for climbing Steinbok Peak.

All content from Kiddle encyclopedia articles (including the article images and facts) can be freely used under Attribution-ShareAlike license, unless stated otherwise. Cite this article:
Steinbok Peak Facts for Kids. Kiddle Encyclopedia.