The Stillwater River rises in Princeton, Massachusetts, the watershed generally known as the Upper Worcester Plateau, or the Monadnock Upland. This watershed tops at Wachusett Mountain, the highest feature in the area. Water flowing east from this high ground feeds the Nashua River Watershed, and water flowing west feeds the Ware River or the Millers River, both heading to the Connecticut River. The Stillwater flows 8.1 miles (13.0 km) through Princeton and Sterling before joining the Quinapoxet River at the Wachusett Reservoir in West Boylston to form the south branch of the Nashua River.

The Stillwater and Quinapoxet rivers are the two major tributaries to the Wachusett Reservoir, which serves as the primary source of water for 2.5 million consumers in 43 communities of central and eastern Massachusetts. The U.S. Geological Survey (USGS), in cooperation with the Massachusetts Department of Conservation and Recreation (DCR), operates stream-flow monitoring gages near the mouths of both rivers. This and other continuous monitoring serves to maintain the overall quality of water within the reservoir. The water of these tributaries to the Wachusett Reservoir has been of high quality for decades.

About 47% of the Stillwater sub-basin is permanently protected open space. The Massachusetts Water Resources Authority owns much of the land. The Town of Holden owns over 600 acres (2.4 km2) as the Trout Brook Conservation Area, and the Massachusetts Audubon Society owns several hundred acres in the Wachusett Meadow Wildlife Sanctuary in addition to other properties within this sub-basin. 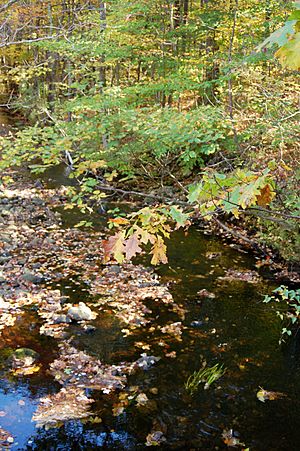 All content from Kiddle encyclopedia articles (including the article images and facts) can be freely used under Attribution-ShareAlike license, unless stated otherwise. Cite this article:
Stillwater River (Nashua River tributary) Facts for Kids. Kiddle Encyclopedia.