Strasburg is a borough in Lancaster County, Pennsylvania, United States. It developed as a linear village along the Great Conestoga Road, stretching about two miles along path later known as the Strasburg Road. The population was 2,800 at the 2000 census. The town was named after Strasbourg in Alsace, the native home of an early settler. The town is often called "Train Town USA" because of the many railroad attractions in and around town, including the Strasburg Rail Road and the Railroad Museum of Pennsylvania. Much of the movie Witness was filmed on a farm nearby. Much of the borough was listed as a historic district by the National Register of Historic Places in 1983.

The Old Conestoga Road was in use by 1714, and by 1750 a tavern and some log houses were built near the current site of Strasburg. Strasburg grew as the trade over the road with Philadelphia grew. By 1759, there were 32 taxable properties in the town, including about ten hotels. Many early settlers were Huguenots or Swiss or German Mennonites and several church congregations of various faiths formed during the 1760s. The first church was built in 1807 by Methodists. 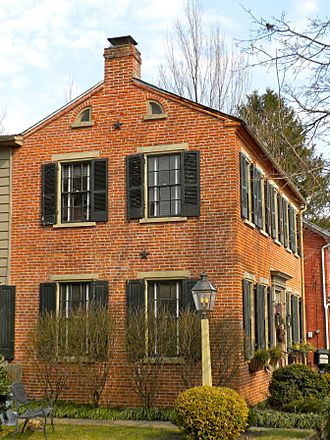 The Old Conestoga Road was the main path connecting Philadelphia to the west, but in 1792 the new Philadelphia and Lancaster Turnpike was built, bypassing Strasburg four miles to the north. However, in 1793 construction on the new Strasburg Road started, roughly following the old road, passing through West Chester on the way to Philadelphia. It attracted traffic because it was not a toll-road, unlike the Philadelphia Turnpike. This road later developed into PA 741.

By 1815 there were 90 houses in Strasburg, about half of which were two stories, indicating a relatively well-off population. There were 53 log, 29 brick, and 4 limestone houses. About half of the log houses survive today, as well as 12 of the brick houses and all 4 of the stone houses. About 150 other houses stand in the historic district, nearly all built before 1900.

According to the United States Census Bureau, the borough has a total area of 1.0 square mile (2.6 km2), all of it land.

There were 1,110 households, out of which 34.9% had children under the age of 18 living with them, 61.6% were married couples living together, 6.9% had a female householder with no husband present, and 28.1% were non-families. 23.7% of all households were made up of individuals, and 9.0% had someone living alone who was 65 years of age or older. The average household size was 2.52 and the average family size was 3.02. 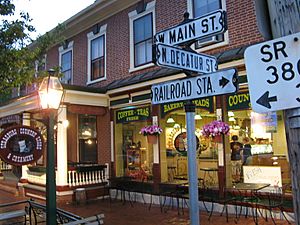 All content from Kiddle encyclopedia articles (including the article images and facts) can be freely used under Attribution-ShareAlike license, unless stated otherwise. Cite this article:
Strasburg, Pennsylvania Facts for Kids. Kiddle Encyclopedia.