It is a herbaceous perennial plant growing to 40–100 cm tall, with alternate, oblong-lanceolate leaves 5–14 cm long. The greenish-white flowers hang from axils on 1–2 cm thin kinked pedicels, each flower with six white tepals, 9–15 mm long. The plants leaves completely encircle the stem, and the stems have a kink at each leaf axil giving the plants stem a "twisted" and wiry appearance. The plants grow in a creeping habit in moist, dense undergrowth.

Streptopus amplexifolius is widely distributed across North America (Greenland, northern United States including Alaska; and most of Canada including Yukon and Northwest Territories). The plant is most often found near shaded stream banks and in moist thickets of the montane and subalpine zones across most of North America. It is also found in central and southern Europe (from Spain to Ukraine and as far north as Germany and Poland) and in eastern Asia (Japan, Korea, Myanmar (Burma) and eastern Russia (Yakutia, Amur, Kamchatka, Sakhalin, Kuril Islands, Khabarovsk, Primorye)). 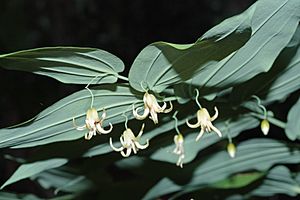 Streptopus amplexifolius was used as a food plant by Native Americans in Eastern North America and as a medicine. The plant was referred to by early settlers of Eastern and Western North America as "wild cucumber" and as "scoot berries" for the mildly laxative effects of the berries if they are eaten in excessive quantities.

The tender young shoots of this plant were eaten by some aboriginal peoples as a salad green, but most considered the plant and berries poisonous. The shoots are sweet with a cucumber-like flavor. The berries are reported to be juicy and sweet, with a watermelon-like flavor. The juice of the berries was used as a soothing treatment for burns by American Indians. 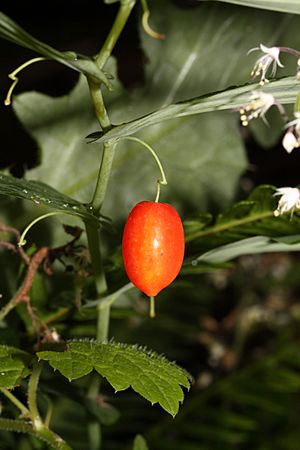 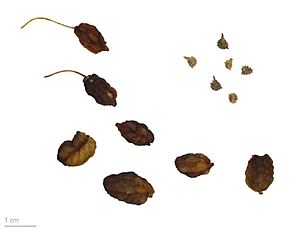 When young, Twisted Stalk resembles members of the genus Veratrum, highly toxic plants that are members of the lily family, also. This plant should not be consumed unless identification is positive.

All content from Kiddle encyclopedia articles (including the article images and facts) can be freely used under Attribution-ShareAlike license, unless stated otherwise. Cite this article:
Streptopus amplexifolius Facts for Kids. Kiddle Encyclopedia.