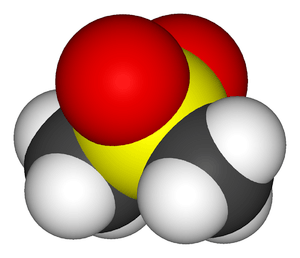 Dimethyl sulfone, an example of a sulfone

A sulfone is a molecule that has a sulfur atom with bonds to two oxygen atoms. The sulfur has two double bonds to the two oxygens. It has a single bond with the other two groups. They are usually made by oxidising thioethers.

They are used in many important chemical reactions. For example, the Julia olefination uses a sulfone to make an alkene from an aldehyde. They are also sometimes used as solvents.

All content from Kiddle encyclopedia articles (including the article images and facts) can be freely used under Attribution-ShareAlike license, unless stated otherwise. Cite this article:
Sulfone Facts for Kids. Kiddle Encyclopedia.