Sultan bin Salman Al Saud (Arabic: سلطان بن سلمان بن عبد العزيز آل سعود‎code: ar is deprecated ) (born 27 June 1956) is a former Royal Saudi Air Force pilot who flew aboard the American STS-51-G Space Shuttle mission as a payload specialist, and a member of the House of Saud. He is the first member of a royal family to fly in space, the first Arab to fly in space, and the first Muslim to fly in space, as well as (at 28 years old) the youngest person ever to fly on the Space Shuttle. On 27 December 2018, he was appointed as chairman of the Board of Directors of the Saudi Space Commission at the rank of minister.

Sultan was born in Riyadh on 27 June 1956, as the second son of Prince Salman, then governor of Riyadh province (currently King of Saudi Arabia). His mother was Sultana bint Turki Al Sudairi. She was a daughter of King Salman's uncle, Turki bin Ahmed Al Sudairi, who was one of the former governors of al-Jouf, Jizan and Asir Province and was a participant in the unification campaign under his cousin, the founder of the Kingdom Abdulaziz ibn Saud. Prince Sultan is a full brother of Fahd, Ahmed, Abdulaziz, Faisal and Hassa.

Sultan completed his elementary and secondary education in Riyadh, He received a bachelor's degree in mass communications from the University of Denver and a master's degree in social and political science with distinction from Syracuse University in 1999.

Sultan bin Salman started his career in 1982 as a researcher in the department of international communications at the Ministry of Information in Saudi Arabia. His tenure lasted until 1984. He served as deputy director of the Saudi media committee for the Saudi athletes participating in the 1984 Summer Olympics in Los Angeles. Later that year, the department of TV advertising was created at the Ministry of Information, and he was appointed its acting director.

From 17 June through 24 June 1985, he flew as a payload specialist on STS-51-G Discovery. As one of a seven-member international crew, which also included American and French astronauts, he represented the Arab Satellite Communications Organization (ARABSAT) in deploying its satellite, ARABSAT-1B.

Later, he assisted in establishing the Association of Space Explorers, an international organization comprising all astronauts and cosmonauts who have been in space. Currently, Sultan is a member of ASE’s International Executive Committee. 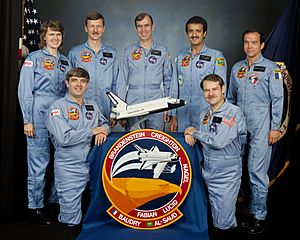 In 1985, Sultan recorded a commercial message that was broadcast on MTV during the Live Aid concert event. His message mentioned his recent trip on the Space Shuttle and was one of 33 such by notable individuals including Cesar Chavez, Coretta Scott King, Carl Sagan, Jesse Jackson and Peter Ueberroth. Sultan bin Salman served in the Royal Saudi Air Force beginning in 1985 and held the rank of lieutenant colonel. He retired from the air force in 1996 with the rank of colonel. 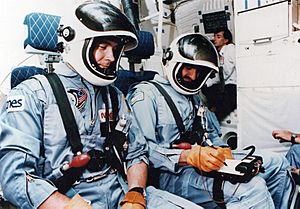 Patrick Baudry and Prince Sultan in 1985

At the time of his space flight, Sultan had over 1,000 cumulative hours of flight time; as of February 2020, he has over 8,000 flight hours as a military and civilian pilot.

In December 2018, he was the chairman of the board of the Saudi Space Commission. From 2009 until joining the space commission, Sultan bin Salman served as the president and chairman of the Saudi Commission for Tourism and National Heritage (SCTH). He served as the commission's secretary general since its inception in 2000. As secretary-general, he contributed significantly to the improvement of Saudi Arabia's tourism and national heritage strategy, and organizational building and innovation in the Saudi government.

On 3 May 2021, Sultan bin Salman was appointed as special advisor to the King with a rank of minister, and chairman of the board of trustees of King Salman Foundation, a newly established non-profit organization.

Sultan enjoys flying, gliding, skiing, and exploring nature in his spare time. He owns a farm in Diriyah which is a model of modern facilities in a historical setting. His farm reflects his attempt to retrace the origins of the Al Saud family, and to document the Al Saud's claims over the Najd.

Sultan has received the following awards/recognition:

All content from Kiddle encyclopedia articles (including the article images and facts) can be freely used under Attribution-ShareAlike license, unless stated otherwise. Cite this article:
Sultan bin Salman Al Saud Facts for Kids. Kiddle Encyclopedia.