Surprise is a village in southwestern Butler County, Nebraska, United States. The population was 43 at the 2010 census.

White people began settling southwestern Butler County in about 1866. In 1881, George Miller built a gristmill on the Big Blue River. He was pleasantly surprised to discover that so much waterpower was available so close to the river's headwaters, and this led him to name the mill "Surprise". Businesses and homes were established near the mill; and in 1883, a post office was established under the name "Surprise". The town plat was registered in 1884. In 1887, the Fremont, Elkhorn and Missouri Valley Railroad established a depot in Surprise, resulting in further expansion of local businesses.

In 1913, chautauquas began to be offered at Chautauqua Park on the river. In the same year, the Surprise Opera House was built. Events held at the latter included local gatherings, lectures, musical performances, and moving pictures. The opera house's role in the community declined after about 1917, as increasing automobile ownership enabled residents to attend events at larger facilities in David City, Seward, and Osceola. Chautauquas continued to be held into the early 1930s; at their peak, the population of Surprise expanded to 1,500 during its week-long Chautauqua Show. The last performance at the opera house took place in 1954; the building is now listed in the National Register of Historic Places.

The population of Surprise reached its peak of about 350 in the early 1920s. Its businesses included a brick factory and two grain elevators; it was an important shipping point for livestock, and exported ice cut from the millpond in the winter. 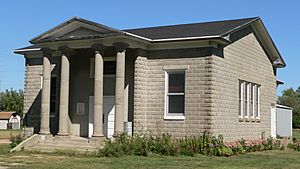 In 1924, Surprise's school was expanded to provide K–12 education. This continued until 1953, when Surprise and four other districts consolidated their high schools; Surprise Public Schools now ends at the eighth grade.

The railroad line through Surprise was abandoned in 1942. The Surprise post office was discontinued in 1988.

There were 17 households, of which 23.5% had children under the age of 18 living with them, 58.8% were married couples living together, 5.9% had a female householder with no husband present, and 35.3% were non-families. 29.4% of all households were made up of individuals, and 11.8% had someone living alone who was 65 years of age or older. The average household size was 2.53 and the average family size was 3.27.

All content from Kiddle encyclopedia articles (including the article images and facts) can be freely used under Attribution-ShareAlike license, unless stated otherwise. Cite this article:
Surprise, Nebraska Facts for Kids. Kiddle Encyclopedia.