Sven Kramer ( born 23 April 1986) is a Dutch long track speed skater who has won an all time record nine World Allround Championships as well as a record ten European Allround Championships. He is the Olympic champion of the 5000 meters at the Vancouver 2010, Sochi 2014 and Pyeongchang 2018 Olympics, and won a record 21 gold medals at the World Single Distance Championships; eight in the 5000 meters, five in the 10,000 meters, and eight in the team pursuit. Kramer is the current world record holder in the team pursuit (alongside Douwe de Vries and Marcel Bosker), and broke the world records in the 5000 meter and 10,000 meter events three times. By winning the 2010 World Allround Championship, Kramer became the first speed skater in history to win four consecutive world allround championships, and eight consecutive international allround championships. He was undefeated in the 18 international allround championships he participated in from the 2006/2007 season until the 2016/2017 season. From November 2007 to March 2009 he was ranked first in the Adelskalender, but despite his dominance as an all-round skater he has since been overtaken on that list by Shani Davis and, more recently, by his team mate Patrick Roest.

On 27 March 2020 it was announced that Kramer extended his contract with the Jumbo-Visma speed skating team until the 2022 Winter Olympics.

Sven Kramer was born on 23 April 1986 in Heerenveen, Friesland, Netherlands. He is the son of former speed skater Yep Kramer, and the four-year-older brother of speed skater Brecht Kramer. He is a born Frisian.

Since 2007 he has been in a relationship with Dutch field hockey player Naomi van As, and they welcomed a daughter in October 2018.

In the 2004 season he came in second at the Junior allround world championships.

Kramer set a new world record for the 5000 m in Salt Lake City, on 19 November 2005, when he was 19 years old. With his time of 6:08.78 he also entered the top 10 of the all time world ranking, the Adelskalender. That season he became the Junior allround world champion.

Kramer stopped skating in the junior competition and became a senior speed skater when he was 20 years old.

On 11 February 2006, he won the silver medal in the 5000 m at the 2006 Winter Olympic in Turin. Kramer also participated in the team pursuit event. The Dutch team was favourite and was leading Italy by nearly a full second in their semi-final, but Kramer stepped on a block and fell, taking Carl Verheijen with him. In the race for bronze, they defeated Norway, giving Kramer his second medal of the Games.

Kramer also competed in two other distances, the 1500 and the 10,000 meter. Due to a screw in his skate that broke just a few minutes before his race, Kramer came in 15th at the 1500. The 10,000 meters did not go as planned and he finished in 7th. Afterward, Kramer stepped on the concrete with his skates in his frustration, damaging the blades.

During the 2006 European Allround Championships in Hamar, Kramer reached fourth place after a tournament full of incidents. On the first day, the ice began to melt and the skaters had to wait until later in the evening to continue skating.

During the 2006 World Allround Championships in Calgary, Kramer set a new world record in the 10,000 meter event with a time of 12:51.60. Kramer won both the two longest distances of the tournament, but had to settle for bronze overall.

On 14 January 2007, Kramer was crowned European Allround Champion in Collalbo, Italy. There had been a tight battle between Kramer and the 2006 winner Enrico Fabris. Fabris had won the two shorter and Kramer the two longer distances, but his overall score was lower than Fabris' (148.800 to 149.389). In addition, his times in the 5 and 10 km were new world records for outdoor skating. By skating a new personal best in the 1500 m Kramer overtook fellow Dutchman Jochem Uytdehaage and Enrico Fabris on the Adelskalender. On the Adelskalender he was ranked first as of 17 November 2007.

In the first competition of the season Fabris beat Kramer in the 5000 meter where Fabris set a new world record, 6:07.40. A week later Kramer got his world record back with a time of 6:03.32.

In Kolomna, Russia, Kramer won the European Allround Championship for the second time.

During the Essent ISU World Cup in Hamar (Norway) Kramer was awarded the Oscar Mathisen Award mainly due to the four world records he skated during 2007. Kramer skated four distances: 1500, 5000, 10,000 meters, and the team pursuit. In the 1500 meter event Kramer skated a good race and placed second, ahead of Olympic Champion Enrico Fabris and Shani Davis. Denny Morrison from Canada won the race. In the 5000 and 10,000 m distances, and the team pursuit, Kramer won three gold medals, just like the year before.

At the national single distance championships in Heerenveen, Kramer won the 1500, 5000 and the 10,000 meters; by winning these three distances he brought his national titles total up to 11.

Kramer won gold at the world allround championships in Hamar.

For the third time, he was chosen as "skater of the year" in the Netherlands and received the Ard Schenk Award. 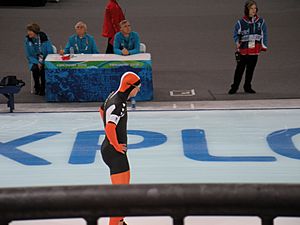 Sven Kramer at the 2010 Winter Olympics in Vancouver

At the national championships for single distances in Heerenveen, Kramer won the 5000 and the 10,000 meters. He failed to qualify for the World Cup for the 1500 meters.

At the European allround championships in Hamar in January 2010 Kramer won gold. He became the all-round European champion for the fourth year in a row. He won the final 10,000 meter race from the Italian Enrico Fabris, who ended second in the overall rankings. Russian Ivan Skobrev finished third.

At the 2010 Winter Olympics, Kramer was the favourite to win three gold medals, like his countryman Ard Schenk at the 1972 Olympics in Sapporo. At the 5000 meters race of the 2010 Winter Olympics in Vancouver, Kramer grabbed the gold medal with a new Olympic record of 6:14.60, beating the previous time of Jochem Uytdehaage by 0.06 seconds. He finished ahead of South Korean Lee Seung-hoon and Russian Ivan Skobrev, leaving four Olympic champions, Shani Davis, Enrico Fabris, Chad Hedrick and Bob de Jong, empty-handed.

Shortly after his 5000 meter victory, an NBC affiliated reporter asked Kramer to say his name, country and what he'd just won, to which Kramer replied "Are you stupid? Hell no, I'm not gonna do that."

In the 10,000 meter event, Kramer finished first, with a time of 12:54.50, only to be disqualified for incorrectly changing lanes during one of the later laps. As a result, Lee Seung-hoon won gold with a new Olympic record, 12:58.55. The lane change mistake was caused by incorrect directions shouted to Kramer by his coach, Gerard Kemkers, near the end of the race.

Kramer didn't participate at the Dutch national championships since he needed rest after the Olympic games in Vancouver, and to recover for the World Allround Championships in Heerenveen on 19–21 March.

At the World allround championships in Heerenveen on 19–21 March 2010, Kramer won an unprecedented fourth consecutive title. In the general classification after three distances, he ranked number 2, but in the final 10K race he skated 12:57.97 which was more than enough to pass Jonathan Kuck who was leading the overall classification before the start. Kuck ended number 2, Håvard Bøkko third. It also was Kramer's 8th consecutive championship title in European and World allround championship, another unprecedented feat.

Kramer did not participate in this season because of an injury to one of the nerves (neuropathy) in his leg.

Kramer won the European allround championships in Heerenveen in January for a record sixth time, tying the record of Rintje Ritsma.

Kramer also won the World Allround Championships in Hamar in February for a record sixth time. 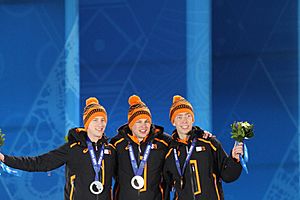 In preparation for the Winter Olympics, Kramer chose not to compete in the European allround championships.

At the 2015 European allround championships in Chelyabinsk, Kramer won his 7th title.

At the 2016 European allround championships in Minsk, Kramer won a record 8th title.

At the 2018 Winter Olympics in Pyeongchang, South Korea, Kramer won the gold medal in the 5000 meter event, breaking his own Olympic record from 2014 with a time of 6:09.76. This was his third gold medal in a row in this event, and he became the only male speed skater to win the same Olympic event three times. He also became the first man to win eight Olympic medals in speed skating. In the 10,000 m event he finished sixth. In the following World championship allround he placed fourth overall.

He is currently in 3rd position in the adelskalender.

All content from Kiddle encyclopedia articles (including the article images and facts) can be freely used under Attribution-ShareAlike license, unless stated otherwise. Cite this article:
Sven Kramer Facts for Kids. Kiddle Encyclopedia.