Swale Brook is a tributary of Tunkhannock Creek in Wyoming County, Pennsylvania, in the United States. It is approximately 2.9 miles (4.7 km) long and flows through Tunkhannock Township and Tunkhannock. The watershed of the stream has an area of 4.01 square miles (10.4 km2). The stream is not designated as an impaired waterbody. The surficial geology near it consists of alluvium, alluvial terrace, Wisconsinan Outwash, Wisconsinan Till, Wisconsinan Ice-Contact Stratified Drift, fill, and a wetland.

There are several road crossings and a railroad bridge crossing over Swale Brook. A number of industries also historically operated near the stream. The stream's watershed is designated as a Coldwater Fishery and a Migratory Fishery and the stream itself has a high level of fish diversity. 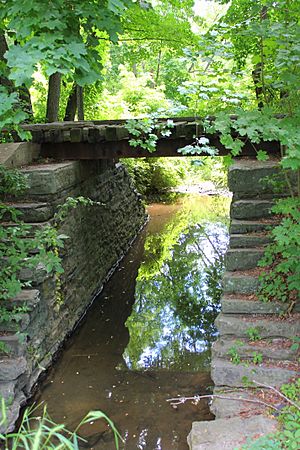 Swale Brook begins in Cruver Pond in Tunkhannock Township. It flows mostly south-southwest for a few tenths of a mile before receiving an unnamed tributary from the right. After several tenths of a mile, the stream turns east-southeast for more than a mile, entering Tunkhannock and receiving an unnamed tributary from the left. It then crosses Pennsylvania Route 29 and then turns south-southeast. A short distance further downstream, the stream crosses US Route 6 and reaches its confluence with Tunkhannock Creek.

Swale Brook is not designated as an impaired waterbody. The Tunkhannock Area School District once applied for and/or received a permit to discharge stormwater into the stream during construction activities.

Swale Brook was once described as a stream of "pure, cold water".

The watershed of Swale Brook has an area of 4.01 square miles (10.4 km2). The stream is entirely within the United States Geological Survey quadrangle of Tunkhannock. Its mouth is located at Tunkhannock.

A pond known as Cruver Pond is located at the headwaters of Swale Brook. There are several road crossings along the stream's course. Additionally, the stream crosses a railroad bridge.

Swale Brook was entered into the Geographic Names Information System on August 2, 1979. Its identifier in the Geographic Names Information System is 1189122. The stream is also known as Quaker Swamp Brook. This variant name appears in Israel C. White's 1883 book The geology of the North Branch Susquehanna River Region in the six counties of Wyoming, Lackawanna, Luzerne, Columbia, Montour and Northumberland.

By the middle of the 19th century, a tannery had been built on Swale Brook. By 1888, a mill had been constructed on the stream in Tunkhannock. It produced wooden butter pails and tubs, shingles, and cider. In 1902, wood from a covered bridge damaged by flooding was processed at the mill.

A steam-powered electric plant operated in the vicinity of Swale Brook until 1903. Shortly before 1906, a canning factory on the stream closed; in that year the Pennsylvania Witch Hazel Company opened at the site. Swale Brook was impacted by flooding during Hurricane Agnes in 1972. It also experienced flooding in 2011. The Federal Emergency Management Agency once purchased some homes along the stream as part of a buyout program.

The drainage basin of Swale Brook is designated as a Coldwater Fishery and a Migratory Fishery. The stream has a very high level of fish diversity and has been described as "packed with fish diversity". At least ten fish species of fish have been observed in the stream, including eastern blacknose dace, common shiners, yellow bullheads, and the rare brook stickleback.

The riparian buffer of Swale Brook is densely vegetated in some reaches.

All content from Kiddle encyclopedia articles (including the article images and facts) can be freely used under Attribution-ShareAlike license, unless stated otherwise. Cite this article:
Swale Brook Facts for Kids. Kiddle Encyclopedia.