The Swedish Grand Prix was a round of the Formula One World Championship from 1973 to 1978. It took place at the Scandinavian Raceway in Anderstorp (Gislaved Municipality), about 30 km from Jönköping, in Småland, Sweden. 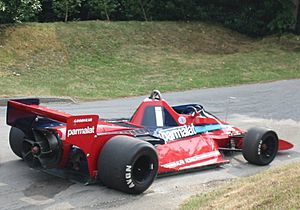 Brabham BT46B at the Goodwood Festival of Speed 2001

1978 saw the only race appearance of the Brabham BT46B. This car was also known at the Fan car. This race car had a large fan in the back of the car. Brabham said the fan was for cooling the car. But the fan also pulled air form underneath the car, creating an large amount of downforce. Niki Lauda won the race in the Fan car.

The deaths in 1978 of both Ronnie Peterson and Gunnar Nilsson contributed to dropping the Swedish GP from the world championship. Interest for Formula One in Sweden fell following the death of these two Swedish racers.

Winners of the Swedish Grand Prix

Note: the races before 1973 were formally called the Swedish Summer Grand Prix.

Event that were not part of the Formula One World Championship have a pink background.

All content from Kiddle encyclopedia articles (including the article images and facts) can be freely used under Attribution-ShareAlike license, unless stated otherwise. Cite this article:
Swedish Grand Prix Facts for Kids. Kiddle Encyclopedia.