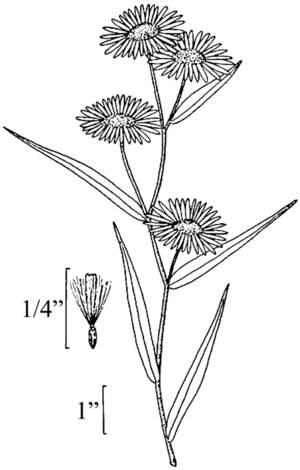 Symphyotrichum boreale is a perennial herbaceous species between 13 and 85 cm tall. The leaves, stem, and overall plant form are slender, and it produces long rhizomes. The inflorescence consists of one to several composite flowers. The ray florets are white to pale purple and the disc florets are cream or pale yellow-coloured, becoming purplish.

Symphyotrichum boreale was formerly included in the large genus Aster as Aster borealis. However, this broad circumscription of Aster is polyphyletic and the North American asters are now mostly classified in Symphyotrichum and several other genera.

Symphyotrichum boreale is native to northern North America from Alaska to Newfoundland, and south to Colorado and West Virginia. It is found in wet, calcareous habitats including fens, marshes, swamps and wet meadows.

In addition to vegetative spread via rhizomes, dispersal is accomplished by wind-blown seed.

The roots are colonised by fungi including arbuscular mycorrhiza and dark septate endophytes. The sac fungus Erysiphe cichoracearum, which causes a powdery mildew, is also known from this species.

All content from Kiddle encyclopedia articles (including the article images and facts) can be freely used under Attribution-ShareAlike license, unless stated otherwise. Cite this article:
Symphyotrichum boreale Facts for Kids. Kiddle Encyclopedia.