Symphyotrichum lanceolatum (formerly Aster lanceolatus) is a species of flowering plant in the family Asteraceae native to North America. Common names include lance-leaved aster, panicled aster, and white panicled aster. It is a perennial, herbaceous plant that may reach 1.5 meters (5 feet) tall or more, sometimes approaching 2 meters (6.6 feet). It has a stout rhizome and can spread to form a clonal colony. The species is currently divided into five varieties which have minor differences in appearance and vary in chromosome counts as well as distribution, with some overlap.

As composite flowers, each flower head has many tiny florets put together into what appear as one, as do all plants in the family Asteraceae. The flowers of panicled aster have 16–50 white ray florets that are up to 10 millimeters long and sometimes tinged pink or purple. The flower centers begin as yellow and become purple as they mature. There are roughly 20–40 disk florets in the center of each flower head, each with five lobes that may spread when open. The leaves are generally hairless but may feel slightly rough to the touch on the top because of tiny bristles. Branching of the inflorescences is in panicles.

Symphyotrichum lanceolatum occurs in a wide variety of mostly moist and open habitats, including riparian areas (areas between land and a river or stream), meadows, and ditches. It is a conservationally secure species whose late-summer and fall appearing flowers play an important role for late-season pollinators and nectar-seeking insects such as bumblebees, wasps, and hoverflies. In addition to being used by indigenous peoples for medicinal purposes, it has been cultivated as an ornamental garden plant and used in the cut flower industry.

This species spreads extensively via its rhizomes and can reproduce by wind-blown seed. Because of its rhizomatic spreading and its production of chemicals that can be detrimental to other plants around it, the species can do damage to ecosystems outside of its native range, as it has in Europe where it has been introduced.

Aster comes from the Ancient Greek word ἀστήρ (astḗr), meaning star, referring to the shape of the flower. The word aster was used to describe a star-like flower as early as 1542 in German physician and botanist Leonhart Fuchs' book De historia stirpium commentarii insignes, Latin for Notable Commentaries on the History of Plants. An old common name for Astereae species using the suffix -wort is starwort, also spelled star-wort or star wort. An early use of this name can be found in the same work by Fuchs as Sternkraut, translated from German literally as star herb.

The specific epithet (second part of the binomial name) lanceolatum is a Latin adjective meaning "lance-shaped." The genus name Symphyotrichum is a combining of Ancient Greek words meaning "junction of hair." 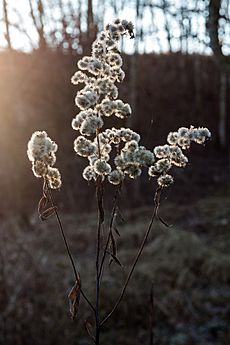 This perennial herb has a thick, erect stem that often grows 1.5 meters (5 feet) tall or more, sometimes approaching 2 meters (6.6 feet). It has a stout rhizome and can spread to form a colony. The leaf blades have winged petioles and may sheath the stem at their bases. The largest leaves, near the base of the plant, are up to about 15 centimeters (6 inches) long. Those higher on the stem are smaller. The lower leaves may have toothed edges. The inflorescence is usually a large, branching array of many flower heads of varying size. There are 16 to 50 ray florets per head, each measuring 3 to 14 millimeters long, in shades of blue, pink, or white. The disk florets bloom yellow and turn purple. 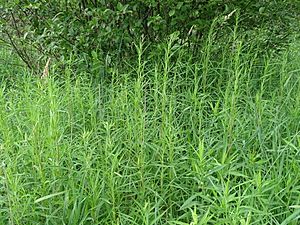 Large clone of S. lanceolatum prior to flowering, Ontario, Canada

Symphyotrichum lanceolatum has a base number of x = 8. Tetraploid, pentaploid, hexaploid, septaploid, and octaploid cytotypes with respective chromosome counts of 32, 40, 48, 56, and 64 have been reported, depending on the infraspecies, as follows:

This species may be divided into two subspecies and five varieties:

The hybrid of this species with Symphyotrichum novi-belgii, known as Sympyotrichum × salignum, originates in cultivation but is now naturalized in Europe. Hybrids have also been reported with S. boreale, S. laeve, S. lateriflorum, S. puniceum and S. racemosum.

Symphyotrichum lanceolatum was formerly included in the large genus Aster as Aster lanceolatus. However, this broad circumscription of Aster is polyphyletic and the North American asters are now mostly classified in Symphyotrichum and several other genera.

Symphyotrichum lanceolatum is native to much of Canada, the United States, and northwestern Mexico in Baja California, Sonora and Chihuahua. In its native range, it occurs in a wide variety of mostly moist, open habitats, including riparian areas, meadows, and ditches. Native distribution and habitat varies among the infraspecies, and details are shown in the table "Distribution and habitat among species and infraspecies."

Symphyotrichum lanceolatum has been introduced and naturalized in many parts of Europe, from Belgium to Serbia to Latvia, where it occurs in disturbed man-made habitats and riparian areas as an invasive species. However, it is not on the European Union's List of invasive alien species of Union concern.

In addition to dispersal by wind-blown seed, Symphyotrichum lanceolatum spreads extensively by rhizomes to create large clonal colonies. Although these clones do not dominate habitats in North America, growing in association with grasses, goldenrods, and other asters, in Europe it is an invasive species that excludes native plants in riparian habitats. This invasiveness has been linked to allelopathic compounds in S. lanceolatum tissue and their effect on native European plants. Viable seed production in Europe seems to be limited, and the species largely spreads there via rhizomes.

The species is visited by a wide variety of pollinating insects, including bees, flies, moths, and wasps. Cross-fertilization is usually required to produce viable seed, and as such, large clones may have low seed production.

Several midge species are known to form galls on Symphyotrichum lanceolatum where their larvae can develop, including Rhopalomyia asteriflorae in the flowers or buds resulting in their stunted growth, and Rhopalomyia strobiligemma.

The leaf-blister gall midge Asteromyia paniculata and the fungus Schlerotium asteris have a symbiotic relationship on the leaves in that the fungus gains additional nutrition from the larva and, in turn, gives some shelter to the midge.

Symphyotrichum lanceolatum may be a minor weed in agricultural fields.

Within its native range, the species was used by indigenous peoples for a variety of medicinal purposes. In the American Southwest, the Zuni people used this plant for wounds and nosebleed. The Iroquois in what is now Eastern Canada used it to treat fever.

Symphyotrichum lanceolatum is also cultivated as an ornamental garden plant and may be used in the cut flower industry.

All content from Kiddle encyclopedia articles (including the article images and facts) can be freely used under Attribution-ShareAlike license, unless stated otherwise. Cite this article:
Symphyotrichum lanceolatum Facts for Kids. Kiddle Encyclopedia.