Tayo the Little Bus (Hangul: 꼬마버스 타요; RR: Kkoma-beoseu Tayo) is a South Korean computer-animated television series created by Iconix Entertainment, Educational Broadcasting System and the Metropolitan Government of Seoul. The show was produced with the help of Seoul mayor Oh Se-hoon's administration. It began airing in South Korea on EBS in 2010 and an English-dubbed version of the series began airing on Disney Junior (Asia) in 2012, with Disney Junior (Australia and New Zealand) following in 2013. In the United States and Canada, Hulu is the exclusive distributor of the series, though the second and third seasons are on Netflix.

Each episode in the start, middle, and end features a brief narration and it has five seasons. A spin-off series to Tayo, known as "Titipo Titipo", premiered between the main series’ fourth season and fifth season. Titipo focuses on the titular character named Titipo, a young passenger train the show is named after along with all his train friends. After the end of Titipo's first season, Tayo's fifth season premiered for English-speaking audiences on October 22, 2018. Titipo the little train returns on the Korean channel for the second season. Titipo's second season premiered for English-speaking audiences starting November 19, 2020. In late 2020, Tayo the Little Bus spinoff Magic Bus Tayo (Korean: 마법버스 타요) was released.

The series features seven main characters. Each of the four original characters (Tayo, Gani, Lani & Rogi) is based on the four actual colors and types of Seoul Buses. 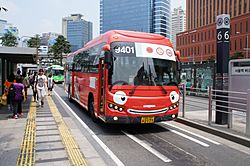 In 2014, the Seoul Metropolitan Government commissioned buses designed as the characters Tayo, Gani, Rogi, and Lani, to run around the Gwanghwamun Square area of the city. This was done as part of an initiative to teach children how to use the bus. The initiative was a massive success, drawing crowds of over 40,000 in a single day. People from all across the country came to see the buses. Although the buses were originally set to run from March 26 until Public Transport Day at the end of April, their popularity led to an extension until Children's Day on May 5. The number of buses was also expanded from the original four to 100. In wake of this success, it was reported that the local governments of other cities in South Korea were considering adopting the campaign. Officials for the city of Seoul initially opposed this on copyright grounds, but they consented in April to letting other cities use the characters for non-commercial purposes.

Jaeyeon Woo of The Wall Street Journal's blog Korea Real-Time, speculated in an April 2014 article that the success of this initiative led both of Gyeonggi Province's gubernatorial candidates, Kim Sang-gon and Nam Kyung-pil, to adopt public transportation issues as a key part of their campaign platforms. Seoul-mayor Park Won-soon, who began the initiative, has been criticized by some of his political rivals, who feel that he took credit for the series, even though the series was begun by his predecessor's administration.

On October 16, 2014, a South Korean group called the Teen Astronauts, launched a space balloon designed as the character Tayo from the Space Science Park in Korea's National Science Museum.

All content from Kiddle encyclopedia articles (including the article images and facts) can be freely used under Attribution-ShareAlike license, unless stated otherwise. Cite this article:
Tayo the Little Bus Facts for Kids. Kiddle Encyclopedia.