Kids Encyclopedia Facts
(Redirected from Tenderloin, San Francisco, California)
This page is about the San Francisco neighborhood. For other uses, see Tenderloin (disambiguation).

The Tenderloin is a neighborhood in downtown San Francisco, California, in the flatlands on the southern slope of Nob Hill, situated between the Union Square shopping district to the northeast and the Civic Center office district to the southwest. It encompasses about 50 square blocks, is a large wedge/triangle in shape (point faces East), and a conservative description has it bounded on the north by Geary Street, on the east by Mason Street, on the south by Market Street and on the west by Van Ness Avenue. The northern boundary with Lower Nob Hill historically has been set at Geary Street.

The terms "Tenderloin Heights" and "The Tendernob" refer to the area around the indefinite boundary between the Upper Tenderloin and Lower Nob Hill. The eastern extent, near Union Square, overlaps with the Theater District.

Part of the western extent of the Tenderloin, Larkin and Hyde Streets between Turk and O'Farrell, was officially named "Little Saigon" by the City of San Francisco. 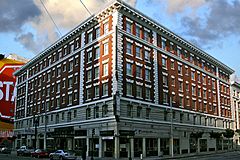 The Ambassador Hotel is a neighborhood renovated single room occupancy building that sits on the Eastern edge of the Tenderloin.

The Tenderloin took its name from an older neighborhood in New York with similar characteristics. There are several explanations of how that neighborhood was named. Some said it was a reference to the neighborhood as the "soft underbelly" (analogous to the cut of meat) of the city, with allusions to vice and corruption, especially graft. Another popular explanation, probably folklore, attributes the name to a New York City police captain, Alexander S. Williams, who was overheard saying that when he was assigned to another part of the city, he could only afford to eat chuck steak on the salary he was earning, but after he was transferred to this neighborhood he was making so much money on the side soliciting bribes that now he could eat tenderloin instead.

The Tenderloin borders the Mission/Market Street corridor, which follows the Spaniards' El Camino Real, which in turn traced an ancient north/south Indian trail. The Tenderloin is sheltered by Nob Hill, and far enough from the bay to be on solid ground. There is evidence that a community resided here several thousand years ago. In the 1960s, the area was excavated to develop the BART/MUNI subway station at Civic Center. During the excavation, the remains of a woman dated to be 5,000 years old were found.

Almost all of the buildings in the neighborhood were destroyed by the 1906 earthquake and the backfires that were set by firefighters to contain the devastation. The area was immediately rebuilt with some hotels opening by 1907 and apartment buildings shortly thereafter, including the historic Cadillac Hotel.

In the mid-20th century the Tenderloin provided work for many musicians in the neighborhood's theaters, hotels, bars and clubs and was the location of the Musician's Union Building on Jones Street. The most famous jazz club was the Black Hawk at Hyde and Turk Streets where Dave Brubeck, Miles Davis, Thelonious Monk, Gerry Mulligan, and other jazz greats recorded live albums for Fantasy Records in the late 1950s and early 1960s.

With housing consisting almost entirely of single-room-occupancy hotel rooms, studio and one bedroom apartments, the Tenderloin historically housed single adults and couples. After World War II, with the decline in central cities throughout the United States, the Tenderloin lost population, creating a large amount of vacant housing units by the mid-1970s. Beginning in the late 1970s, after the Vietnam War, the Tenderloin received large numbers of refugees from Southeast Asia—first ethnic Chinese from Vietnam, then Khmer from Cambodia and Hmong from Laos. The low-cost vacant housing, and the proximity to Chinatown through the Stockton Street Tunnel, made the area appealing to refugees and resettlement agencies. Studio apartments became home for families of four and five people and became what a local police officer called "vertical villages." The Tenderloin quickly increased from having just a few children to having over 3,500 and this population has remained. A number of neighborhood Southeast Asian restaurants, bánh mì coffee shops, ethnic grocery stores, video shops, and other stores opened at this time, which still exist.

The apartment where Dashiell Hammett wrote The Maltese Falcon was once in the boundaries of the Tenderloin at the corner of Hyde and Post. Both the movie and book were based in San Francisco's Tenderloin. There is also an alley in what is now Nob Hill, named for the book's author (Dashiell Hammett). It lies outside the Tenderloin because the boundary was defined with borders different from today's. Some locations, such as Sam Spade's apartment and John's Grill, also no longer lie in the Tenderloin because local economics and real estate have changed the character and labeling of areas over time.

In July 2008, the area was designated as a historic district on the National Register of Historic Places.

The position held by policy-makers regarding gentrification is often divided, with one side of the debate arguing that it is of benefit to the public economy and revitalisation of the built setting, whilst the other side argues that the huge social costs and displacement of people, especially the poor, outweigh all potential strengths of the process.

The Tenderloin serves as a mecca for the art scene in San Francisco, housing the "White Walls" gallery and "Shooting Gallery". The Tenderloin has been home to mural work by artists such as Johanna Poethig, Mona Caron, Banksy, Shepard Fairey, Barry McGee, Mike Giant, Blek Le Rat and Dan Plasma.

The "Book & Job" gallery has become known for hosting skating legends such as Tommy Guerrero and promoting "Zine Weekends."

In recent years, residents have spearheaded a local arts revival.

In 1987, residents and others from the Aarti Hotel on Leavenworth Street founded the 509 Cultural Center at 509 Ellis Street. After the 1989 earthquake damaged that facility, artists founded The Luggage Store at 1007 Market, at the intersection of 6th Street, Market, Taylor and Golden Gate Avenue. In 1989 the Tenderloin Reflection and Education Center (TREC) spun off from St Anthony foundation and operated a cultural center including dance, music, writing quilting, and other arts workshops in the St. Boniface Neighborhood Center. Artists and activists such as Eric Ehn from the Iowa Writing Workshop and Theatre Artaud; Miya Masoaka, a recording artist with Asian Improv Records; Lucy Jane Bledsoe, published novelist and writer for the East Bay Express; Pearl Ubungen, choreographer; Ben Clarke, Founding Editor of Freedom Voices; and Maketa Groves, poet and published author at Curbstone Press; and Tenderloin resident and Athabaskan poet Mary TallMountain offered numerous free workshops. TREC and its publishing project Freedom Voices continue to offer workshops on an occasional basis at the Public Library, Hospitality House, the Faithful Fools and other locations in the neighborhood. Tender Leaves, the Center's literary journal was published from 1987 to 2006.

From 2006 to 2009, The Loin's Mouth, conceived by its editor Rachel M., was a semi-quarterly publication about life in the Tenderloin and Tendernob areas. Since then, others have come about to fill the gap including the Tenderloin Reading Series, which is a quarterly literary event in the neighborhood as well as The Tender, a local journal focusing on the events, food, and politics of the neighborhood.

In 2006, Gray Area Foundation for the Arts was formed to produce, exhibit, and develop creativity with the most contemporary new media technologies. Initially located on Taylor Street in an 8,000 sq ft (740 m2) space, they have since moved across the street to rent space from The Warfield.

In years past, the local Vietnamese Community has hosted the Tết celebration of the Vietnamese Lunar New Year in the Little Saigon section of the Tenderloin.

Historically, the downtown Tenderloin had no parks between Union Square to the East and Civic Center Plaza to the West until a number of activists, who organized the City's Citizens Committee for Open Space, advocated for more open space in the Tenderloin in the 1970s. As a result, a number of parks and playgrounds were created including first Boeddeker Park, a multi-use facility, then the youth-oriented Tenderloin Playground, followed by a number of mini-playgrounds.

Boeddeker Park, located at the corner of Eddy and Jones Streets, is one of the most used parks per square foot in the City but has had difficulty meeting the needs of the neighborhood's varied communities. It is often unused by children and is commonly occupied by drug addicts and intoxicated people during the daytime. Periodically there are efforts to improve the park, such as holding free concerts.

The Tenderloin Children's Playground, on Ellis Street between Leavenworth and Hyde Streets, was opened in 1995 and has attractive indoor and outdoor recreational facilities and hosts a number of community and family events.

Sgt. John Macaulay Park, named after a San Francisco police officer who was killed in the adjacent alley while on duty, is a small gated playground at the corner of O'Farrell and Larkin Streets. Although the park is located across the street from a club, it is frequented by parents and children from the neighborhood.

The "Tenderloin National Forest" (a project of the nonprofit organization The Luggage Store/509 Cultural Center) is an unofficial park that was established from 1987–present that maintains the park and opening hours. It is located on Cohen Alley just off Ellis Street.

In March 2011, People for the Ethical Treatment of Animals (PETA) Vice President Tracy Reiman sent Mayor Ed Lee a letter proposing for renaming of the neighborhood and suggesting alternative name like the Tempeh District, claiming "the city deserves a neighborhood named after a delicious cruelty-free food instead of the flesh of an abused animal". The proposal was met with ridicule by locals and Mayor Lee responded that it was more important to improve the lives of the residents than rename the neighborhood.

All content from Kiddle encyclopedia articles (including the article images and facts) can be freely used under Attribution-ShareAlike license, unless stated otherwise. Cite this article:
Tenderloin, San Francisco Facts for Kids. Kiddle Encyclopedia.