Tesnatee Creek is a stream in Georgia, and is a tributary of the Chestatee River. The creek is approximately 12.06 miles (19.41 km) long.

Tesnatee is a name derived from the Cherokee language meaning "wild turkey". 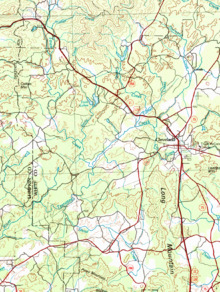 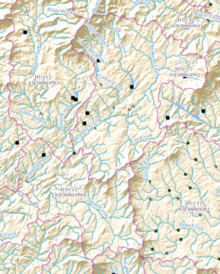 Map showing Tesnatee Creek and its 2 sub-watersheds (502 and 504) (outlined in pink), and the Chestatee River

The creek rises at the confluence of Thurmond Creek and Freeman Creek in the community of Yonah, west of Yonah Mountain and State Route 75, and north of Cleveland in White County. The creek heads in a southwesterly direction for approximately 2.6 miles, crosses U.S. Route 129 northwest of Cleveland, and makes a brief turn to the west as it picks up Cox Creek from the east, then turns back to the southwest for another 2.6 miles, picking up two unnamed branches on its way to its meeting with Town Creek. The combined creek, named Tesnatee Creek and taking on the appearance of a river rather than a creek in term of width, winds southwest and then to the west for approximately 2.9 miles, where it picks up Shoal Creek, which drains the area of southern White County between US 129 and southeast of Tesnatee Creek. Just northeast of where Tesnatee Creek flows into the Chestatee River, the creek is joined by Chateen Creek, and flows just across the border into Lumpkin County before it meets the Chestatee.

All content from Kiddle encyclopedia articles (including the article images and facts) can be freely used under Attribution-ShareAlike license, unless stated otherwise. Cite this article:
Tesnatee Creek Facts for Kids. Kiddle Encyclopedia.