The Alligator is composed of bright red-orange Supai Group ( four members), (cliffs, and slopes), upon a red, Redwall Limestone, large cliff. Also being a cliff-former, the curving "tail-of-the-alligator" is a flat-topped platform of the Redwall Limestone. 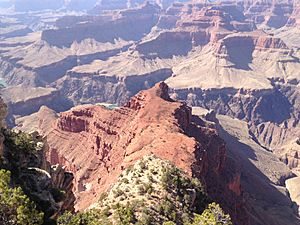 Looking down the upper Esplanade Sandstone, from Mohave Point 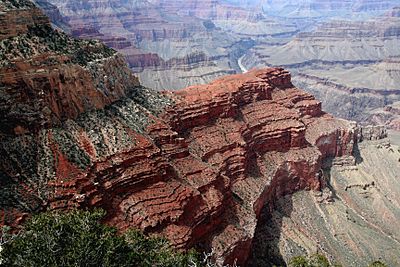 The Alligator seen from Hopi Point

The Alligator landform is composed of two basic rock units, (the prominence-Supai Group (roughly 1,100 ft, 340 m thick), and below, Redwall Limestone ( approximately 800 ft, 240 m thick). Because both are cliff-formers (and therefor shelf-formers), the high-point of The Alligator is on the upper platform (shelf) of the Supai Group, the highly resistant Esplanade Sandstone. The curved tail of The Alligator is the bottom platform, sitting on top of the highly resistant Redwall Limestone. As the tail curves, a smaller, secondary cliff-platform (above the Redwall), is composed of Supai unit 2, the also resistant Manakacha Formation. (The Redwall base, also sits on a shorter cliff (and platform), of Tonto Group, no. 3, the Muav Limestone). The rest of the Tonto Group sits on the Granite Gorge at the Colorado River with the walls of Vishnu Basement Rocks.

All content from Kiddle encyclopedia articles (including the article images and facts) can be freely used under Attribution-ShareAlike license, unless stated otherwise. Cite this article:
The Alligator (Grand Canyon) Facts for Kids. Kiddle Encyclopedia.