The Cambrian Muav Limestone is the upper geologic unit of the 3-member Tonto Group. It is about 650 feet (198 m) thick at its maximum. It is a resistant cliff-forming unit. The Muav consists of dark to light-gray, brown, and orange red limestone with dolomite and calcareous mudstone. The Muav is overlain in some areas by the Devonian Temple Butte Formation, but the major unit above, are the vertical cliffs of Mississippian Redwall Limestone. The Muav is located in the lower elevations of the Grand Canyon, Arizona.

The Muav is in part younger than, and in-part grades into, the Bright Angel Shale, which is less erosion resistant and is categorized as a slope-forming unit. The Muav is about 350 feet thick in the east and reaches about 600 feet thick in the western part of its exposure area in the Grand Canyon. The two units lie above the erosion-resistant cliff-forming Tapeats Sandstone. 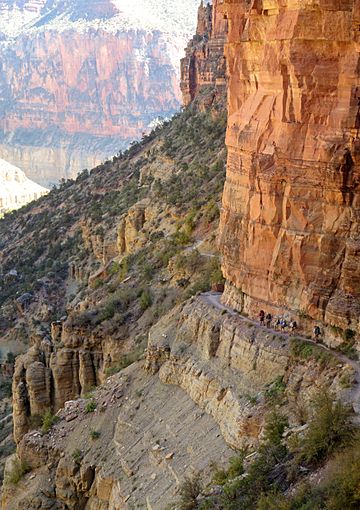 Beyond the Grand Canyon area the Muav occurs in southern Utah, southern Nevada and southern California. In the California occurrence it is known as the Muav Marble.

The units of the Tonto Group:

All content from Kiddle encyclopedia articles (including the article images and facts) can be freely used under Attribution-ShareAlike license, unless stated otherwise. Cite this article:
Muav Limestone Facts for Kids. Kiddle Encyclopedia.