The Tribe is a science fiction drama television series which premiered on Channel 5 in the United Kingdom on 24 April 1999. The series was created by Raymond Thompson and Harry Duffin, and was developed and produced by the Cloud 9 Screen Entertainment Group in New Zealand. The series was commissioned by Channel 5, who received the initial screening rights. The series made its New Zealand premiere in 2000 on TV4.

Primarily aimed at teenagers, The Tribe is set in a post-apocalyptic city in which all adults have been killed as the result of an unknown virus. The series focuses on the remaining children and teenagers who must navigate the social and personal issues of adolescence, while being faced with the larger problems of a society in a state of anarchy. The inhabitants of the city form social groups, or tribes, with the focus of the series on the Mall Rats, who fight to survive among other threatening tribes such as the Locos. Overarching themes include the focus on change from tradition, empowerment, religion, and the exploration of power and corruption. The series was filmed in Wellington, New Zealand.

The series ran for 260 episodes and aired its finale on 6 September 2003. A sequel series entitled The New Tomorrow was commissioned by Channel 5 and the Seven Network in Australia and first aired in 2005. It depicted the descendants of characters from The Tribe and was aimed at a younger audience. The Tribe experienced a resurgence in popularity after screening on ABC3 in Australia in 2009. This led to Cloud 9 developing a series of novels to continue the story of the television series, the first of which was released in 2011.

In a post-apocalyptic city, all of the adults have been killed as a result of an unknown virus, leaving the children and teenagers to survive in a state of anarchy. Several social groups, or tribes, have formed, including the "Locos", an unruly tribe controlling the city under the leadership of Zoot, who is later killed. On the streets, Amber and Dal lead a group of children to safety and take refuge in an abandoned shopping mall, forming a new tribe called the "Mall Rats". They are joined by Bray and Trudy, who is pregnant; Bray's brother, Zoot, is the father. The tribe learns to solve issues including food and water shortage. A second wave of the virus strikes the city, and the tribe searches to find a cure.

At Eagle Mountain, Amber and Zandra, who is pregnant, are killed in an explosion. The tribe continues searching for an antidote to the virus and are successful, with Tai-San becoming the only one aware of the formula to produce it. Under Bray's leadership, the Mall Rats use their position of power to unite the other tribes and bring peace to the city. A bill of rights is developed by Danni, along with a trading market in the mall, and a newsletter by Ellie detailing the city's progress. The virus is later diminished, and a new tribe called the "Chosen" surfaces, worshipping Zoot as their god.

The Chosen take control of the city, led by the Guardian and the "Supreme Mother", who is a brainwashed Trudy. The Mall Rats are captured and, along with other prisoners of the city, are given the choice to join the Chosen or work as slaves, with many civilians being sent away due to rebellion. After escaping, Ebony and Lex encounter the Eco tribe and discover that its leader is Amber, whose death had been faked by Ebony. The Eco tribe join the revolt and the remaining Mall Rats recruit other tribes to their side. The Chosen are overthrown, and Ebony is elected as city leader; she banishes Bray and Amber when they refuse to let her execute the Guardian.

The city is invaded and conquered by a group of paratroopers, who are called the "Technos" and possess advanced technology. Ebony maintains control of the city through a deal with the Technos general, Jay. After Bray is captured, Trudy helps Amber give birth on the outskirts of town. They flee to the Ecos, then later rejoin the Mall Rats. In an attempt to create a utopia, the leader of the Technos, Ram, releases a virtual game to which the people of the city become addicted. Ebony and Jay betray Ram and escape the city. The Mall Rats defeat Ram by imprisoning him in a virtual reality, with the assistance of Ram's lieutenant, Mega.

Mega becomes the new leader of the Technos, and plans to take over the city. He orders everyone to be branded with a barcode and set to manual labour. Ebony is manipulated by virtual reality to believe that Zoot is alive. The Mall Rats try to learn the location of their members who were removed by the Technos. Ram is rescued by a vagabond, Slade, who takes him to the country town Liberty. Amber and Jay lead an attack against the city, capturing Mega. Ram infiltrates Mega's technology and creates an artificial intelligence program, which goes rogue and releases a new virus. The Mall Rats and their allies evacuate the city by boat.

The cast and crew amounted to between 400 and 500 people on each series of The Tribe. Filming of each series took about four to six months, chiefly in two studios at Cloud 9's production centre in Wellington, New Zealand. The permanent set of the "Phoenix Shopping Mall" was located in Studio A. This large set took five weeks to build prior to the commencement of principal photography and was said to be the largest set built for a production in New Zealand at the time. All of the shops contained in the Mall were built to almost realistic shop size specifications and designed to last for a long time. 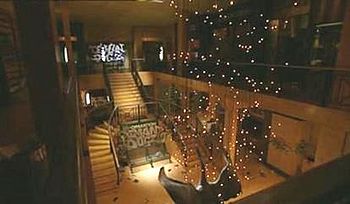 The set of the "Phoenix Shopping Mall" in series one.

Studio B housed the sewers that the Mall Rats use to secretly escape the Mall, as well as temporary structures that were built for scenes outside the Mall. Between the filming of the second and third series of The Tribe, the Mall set was repainted and redressed for use on another Cloud 9 production, Atlantis High.

Scenes of The Tribe were also shot on location in and around Wellington. For example, the Cloud 9 Studios car park was used as the exterior of the Mall and Alice's and Ellie's farmhouse was built in the rural area of Whitemans Valley in Upper Hutt. At times, over some weekends, the crew closed off Wellington streets to shoot scenes that took place in the desolate city streets.

Most of the cast had agents prior to the casting in 1998, as they had already worked on productions that were filmed in New Zealand, such as Xena: Warrior Princess, Hercules: The Legendary Journeys or Mirror, Mirror II.

Many of the actors had worked with Thompson on other Cloud 9 productions before they auditioned for The Tribe. Jennyfer Jewell (Ellie) and Ryan Runciman (Ryan) had worked on The Enid Blyton Adventure Series in 1996 and Jewell had also starred in The Enid Blyton Secret Series in 1997 alongside Daniel James (Zoot). Beth Allen (Amber) and Michael Wesley-Smith (Jack) had been cast in The Legend of William Tell in 1998. Many cast members from series one had acted in William Shatner's A Twist in the Tale in 1999.

The majority of the actors cast in series one were students and were tutored between scenes at Cloud 9's production centre. The underage cast members stayed in the "Cast House" for the duration of the shoot and were accompanied by chaperones on set.

Pre-production for series six started in September 2003 and a script for a Tribe movie was written and put on the market. The scripts for the first two episodes of series six were included on the Series 5 DVD box set (released in 2006), and told the story of the Mall Rats as they arrived on an unknown island.

However, Nick Wilson and Thompson decided that although "the show was still performing well, [they] felt that the cast was getting too old [and that] it was beginning to stretch the core proposition." Some of the cast and crew members went on to work on other productions.

All content from Kiddle encyclopedia articles (including the article images and facts) can be freely used under Attribution-ShareAlike license, unless stated otherwise. Cite this article:
The Tribe (1999 TV series) Facts for Kids. Kiddle Encyclopedia.