The Thelon River (Inuktitut: Akilinik, lit. "on the other side") stretches 900 kilometres (560 mi) across northern Canada. Its source is Whitefish Lake in the Northwest Territories, and it flows east to Baker Lake in Nunavut. The Thelon ultimately drains into Hudson Bay at Chesterfield Inlet. 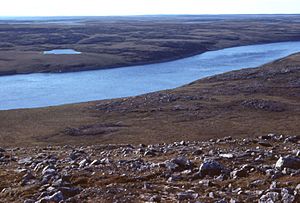 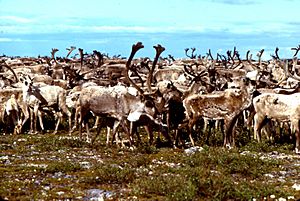 The drainage basin of the Thelon River encompasses some 142,400 square kilometres (55,000 sq mi). Located far from almost all human development, the Thelon and its surroundings are entirely pristine wilderness. It has been described as Canada's remotest river.

The river has a width of up to a kilometre (0.6 mi) along much of its lower section, widening into Beverly, Aberdeen, and Schultz Lakes about 100 kilometres (62 mi) upstream from its mouth at Baker Lake.

Approximately 100 moose and more than 2,000 muskoxen forage on the land around the Thelon. 300,000 migrating barren-ground caribou cross the river every fall and spring.

Inuit - including Caribou Inuit and Copper Inuit - have long occupied the sparsely-populated lands around the Thelon. Artifacts of Inuit hunting and travel (including inukshuk guide stones) are readily observed near the river.

Over the winter of 1926–27, John Hornby starved to death on the Thelon along with two other men. They had planned to hunt migrating caribou, but failed to find the herd. Nevertheless, on the basis of Hornby's earlier explorations with James Charles Critchell Bullock in 1923, the Thelon Game Sanctuary was established in 1927, renamed the Thelon Wildlife Sanctuary in 1956.

In 1927(?), the Norwegian explorer and writer Helge Ingstad went by dog sled to the headwaters of the Thelon (Lynx Lake) together with native peoples from the east end of Great Slave Lake. This he detailed in his book The Land of Feast and Famine.

In 1990, the lower 545 kilometres (339 mi) of the Thelon were designated a Canadian Heritage River. Although there is no road access to the river, a number of wilderness campers and canoeists visit the Thelon every summer.

All content from Kiddle encyclopedia articles (including the article images and facts) can be freely used under Attribution-ShareAlike license, unless stated otherwise. Cite this article:
Thelon River Facts for Kids. Kiddle Encyclopedia.