Thomas Bailey Aldrich ( November 11, 1836 – March 19, 1907) was an American literary figure. He is best known for the long time he was the editor of The Atlantic, when he published works by Charles Chesnutt and for his poetry, such as "The Unguarded Gates."

Thomas Bailey Aldrich was born in Portsmouth, New Hampshire on November 11, 1836. When Aldrich was a child, his father moved to New Orleans. After 10 years, Aldrich was sent back to Portsmouth to get ready for college. This time in his life is talked about in his semi-autobiographical (written about a fictional character but partly about himself) story The Story of a Bad Boy (1870), in which "Tom Bailey" is the young hero.

Aldrich gave up on going to college after his father's death in 1849. At age 16, he joined his uncle's business office in New York in 1852 and started working on the newspapers and magazines. Aldrich made friends with other young poets, artists and wits of New York's "bohemia" of the early 1860s, including Edmund Clarence Stedman, Richard Henry Stoddard, Fitz Hugh Ludlow, Bayard Taylor and Walt Whitman. From 1856 to 1859, Aldrich worked for the Home Journal, which was edited by Nathaniel Parker Willis at that time. During the Civil War, he was the editor of the New York Illustrated News.

In 1865 Aldrich went back to New England, where he was editor in Boston for ten years for Ticknor and Fields — at the time they were very well thought of — of the eclectic weekly Every Saturday. It stopped being made in 1875. From 1881 to 1890, Aldrich was editor of the important Atlantic Monthly. As editor, he made tension with his publisher Henry Houghton by not agreeing to publish commissioned articles (ones that had been paid for) by his friends, including Woodrow Wilson and Marion Crawford. When Houghton argued with Aldrich for refusing articles from his friend Daniel Coit Gilman, Aldrich threatened to quit his job and finally did so in June 1890.

Aldrich's longer narrative or dramatic poems did not do as well. Important work includes "Hesperides," "When the Sultan Goes to Ispahan," "Before the Rain," "Nameless Pain," "The Tragedy," "Seadrift," "Tiger Lilies," "The One White Rose," "Palabras Cariñosas," "Destiny," or the eight-line poem "Identity." 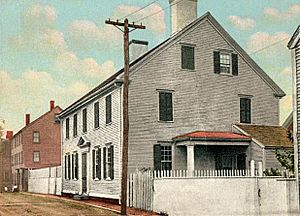 Beginning with the collection of stories called Marjorie Daw and Other People (1873), Aldrich wrote works of realism and quiet humour. His books Prudence Palfrey (1874), The Queen of Sheba (1877), and The Stillwater Tragedy (1880) had more dramatic action. The first showed Portsmouth with the loving touch shown in the shorter funny tale, A Rivermouth Romance (1877). In An Old Town by the Sea (1893), Aldrich wrote about his place of birth again. Travel and description are the theme of From Ponkapog to Pesth (1883).

Aldrich married and had two sons. Mark Twain is said to hated Aldrich's wife Lilian. He wrote in 1893: "Lord, I loathe that woman so! She is an idiot—an absolute idiot—and does not know it ... and her husband, the sincerest man that walks ... tied for life to this vacant hellion, this clothes-rack, this twaddling, blethering, driveling blatherskite!"

The Aldrich family were close friends of Henry L. Pierce, former mayor of Boston and chocolate magnate (he made a lot of money from the chocolate business). When Pierce died death in 1896, he willed the Aldriches his home in Canton, Massachusetts.

In 1901, Aldrich's son Charles, who had gotten married the year before, was found to have a disease called tuberculosis. Aldrich built two houses, one for his son and one for him and his family, in Saranac Lake, New York, which was the leading treatment centre for the disease at the time. On March 6, 1904, Charles Aldrich died of tuberculosis, at the age of thirty-four. The family left Saranac Lake and never went back. 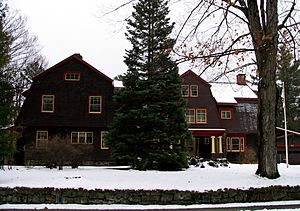 147 Park Avenue, Saranac Lake. Aldrich called it "The Porcupine" because it had so many good points. The "Cure Porches" are on the other side of the house. Today it is a bed and breakfast.

All content from Kiddle encyclopedia articles (including the article images and facts) can be freely used under Attribution-ShareAlike license, unless stated otherwise. Cite this article:
Thomas Bailey Aldrich Facts for Kids. Kiddle Encyclopedia.