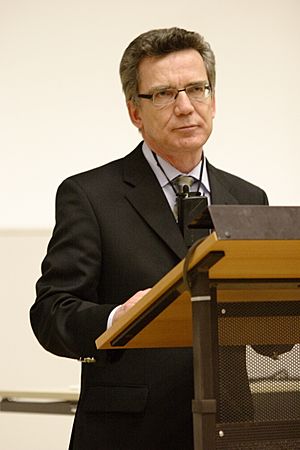 Karl Ernst Thomas de Maizière (born 21 January 1954 in Bonn) was the Minister for Special Affairs in the German government and Head of the Federal Chancellery. On 3 March 2011, because of Karl-Theodor zu Guttenberg's resignation, de Maizière became Federal Minister for Defence.

His father was Ulrich de Maizière, who was Inspector General of the Bundeswehr. The senior officer in all German Armed Forces. In the UK, he would be Chief of the Defence Staff and in the US, Chairman of the Joint Chiefs of Staff,

All content from Kiddle encyclopedia articles (including the article images and facts) can be freely used under Attribution-ShareAlike license, unless stated otherwise. Cite this article:
Thomas de Maizière Facts for Kids. Kiddle Encyclopedia.