Three Forks is a city in Gallatin County, Montana, United States and is located within the watershed valley system of both the Missouri and Mississippi rivers drainage basins — and is historically considered the birthplace or start of the Missouri River. The population was 1,869 at the 2010 census. The city of Three Forks is named so because it lies geographically near the point, in nearby Missouri Headwaters State Park, where the Jefferson, Madison, and Gallatin Rivers converge to form the Missouri River — the longest single river in North America, as well as the major portion of the Missouri-Mississippi River System from the headwaters near Three Forks to its discharge into the Gulf of Mexico. Three Forks is part of the Bozeman, MT Micropolitan Statistical Area of approximately 100,000 people and the greater Bozeman demographic area of approximately 125,000 people. 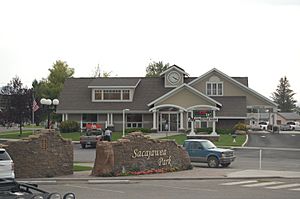 Sacajawea Park, a memorial to Sacajawea, in Three Forks

The three rivers, west to east, were named by Meriwether Lewis in late July 1805 for President Thomas Jefferson, Secretary of State James Madison, and Treasury Secretary Albert Gallatin which was in the times the genesis of a mild controversy and eventually spawned a modern day geographical controversy—in both cases regarding length comparisons between the Missouri and Mississippi rivers. Today the two confluences are incorporated inside Missouri Headwaters State Park, which is also a U.S. National Historic Landmark.

The Lewis and Clark expedition visited the site on 28 July 1805. Meriwether Lewis in his journal entry wrote:

Both Capt. C. and myself corresponded in opinon with rispect [sic] to the impropriety of calling either of these [three] streams the Missouri and accordingly agreed to name them after the President of the United States and the Secretaries of the Treasury and state.

One consequence of their decision to designate, map and name the Jefferson—the largest— as a separate tributary river, is that today the Mississippi river can arguably be called longer than the Missouri river because extensive re-channelization of the streambed for hydroelectric power projects has shortened the river while the Mississippi Delta has grown lengthening the rival river.

Honored in Three Forks, the Indian woman Sacagawea is best known as the interpreter and guide for the Lewis and Clark Expedition. In 1800, she was captured by the Mennetaree tribe near the present site of Three Forks. She later returned to this area with Lewis and Clark and the Corps of Discovery. A statue of Sacagawea now sits in a park off Main Street.

The present-day city of Three Forks was founded Sept. 17, 1908 by John Q. Adams, a Milwaukee Road land agent. The Milwaukee (Railroad) Land Co., platted the town and held a lot sale that day. Some buildings were moved to the present city from "Old Town Three Forks", a mile to the northeast. The city became a division point on the Milwaukee Road's Rocky Mountain Division and was an important hub for the railroad during the existence of the Milwaukee in Montana (1908-1980).

There were 785 households of which 31.1% had children under the age of 18 living with them, 51.2% were married couples living together, 9.0% had a female householder with no husband present, 6.5% had a male householder with no wife present, and 33.2% were non-families. 28.4% of all households were made up of individuals and 11.3% had someone living alone who was 65 years of age or older. The average household size was 2.37 and the average family size was 2.90.

There were 686 households out of which 35.4% had children under the age of 18 living with them, 59.3% were married couples living together, 5.8% had a female householder with no husband present, and 31.5% were non-families. 26.7% of all households were made up of individuals and 12.1% had someone living alone who was 65 years of age or older. The average household size was 2.51 and the average family size was 3.08.

In recent years Three Forks has increased in size exponentially due to the booming economy of the nearby city of Bozeman. Many major subdivisions such as Rolling Glen Subdivision are expected to increase the city's population threefold putting a burden on area schools, and law enforcement.

Area attractions such as Lewis & Clark Caverns State Park have made Three Forks and the surrounding area a hub for tourism. Being at the cross-roads of Interstate 90 and U.S. Route 287, Three Forks is a stopping point for many travelers.

Also adding to the prosperity of Three Forks are flourishing businesses, the longest-serving of which is The Three Forks Herald, which was established in a tent the same week Three Forks was founded in September 1908. The newspaper has never missed an issue since.

The Three Forks High School mascot is the Wolves.

All content from Kiddle encyclopedia articles (including the article images and facts) can be freely used under Attribution-ShareAlike license, unless stated otherwise. Cite this article:
Three Forks, Gallatin County, Montana Facts for Kids. Kiddle Encyclopedia.